In the 1960s, the U.S. Government initiated studies to determine if coal was feasible as a gas turbine fuel. In these tests, coal was pulverized and mixed with various liquids prior to being fired in a gas turbine combustor. The result of these tests was that gas turbines are not capable of directly combusting pulverized or slurried coal for electrical production.

Following up on the results of the tests in the 1960s, the U.S. Government sponsored studies which evaluated the potential for firing synthesis gas (syngas) produced via coal gasification in gas turbines. These studies, done in the 1970s, led directly to the first successful demonstration of the basic integrated gasification combined cycle (IGCC) concept at a commercial scale, the Cool Water Project, part of DOE's Clean Coal Technology (CCT) Program. The Cool Water Project was conducted in Southern California, and was a five-year R&D project running from 1984 through 1989. Texaco gasifier technology (later owned in turn by GE, and now by Air Products) was used to produce syngas to feed a GE-7E gas turbine based combined cycle. A net power generation capacity of 96 MWe was achieved using bituminous coal as a fuel and 99.5% pure oxygen as the oxidant. The lessons learned in the Cool Water Project provided a sound basis for the advancement of IGCC design. Throughout the 1990s several commercial IGCC plants were put into operation as IGCC technology matured.

Described below are four commercial-scale, coal8 IGCC plants, two in the U.S. and two in Europe which achieved operational success during their lifetimes. Each has been or was operational for well over a decade operating on coal, experiencing similar availabilities (around 80%) and similar operational issues, including the fouling of heat exchangers.

The most recent major IGCC project to begin commercial operation in the United States is the Edwardsport IGCC Project:

Duke Energy Edwardsport IGCC Project1
In June of 2008, Duke Energy broke ground on a new IGCC plant in Edwardsport, Indiana. The project, which began commercial operations in June 2013, uses 1.7-1.9 million tons of coal per year to generate 618 MW of base-load electricity. It is based on the GE Energy "Reference Plant" design2; main units consist of two GE gasifiers in parallel, two GE 7FB combustion turbines in parallel (232 MWe each), and one GE steam turbine (320 MWe). The IGCC plant replaces a now demolished 160 MW coal-fired power plant at the site. The new IGCC plant is cleaner than the old plant while providing more power; SOx, NOx, and particulate emissions are well under new source limits as illustrated3: 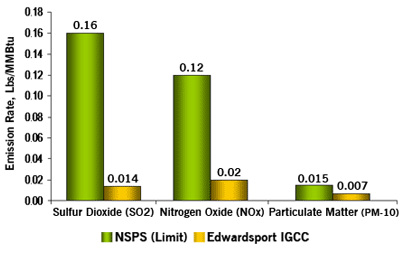 In addition, activated carbon beds for mercury removal are utilized, and no thermal discharge occurs to the adjacent White River. In reference to CO2 emissions, there is potential for carbon capture and geologic sequestration in the context of the Edwardsport IGCC project. Space was reserved at the site for CO2 capture equipment. Also, Duke initiated a front-end engineering and design study for carbon capture and filed a $121 million request with Indiana Utility Regulatory Commission for detailed characterization of deep saline aquifers, depleted oil or gas fields, and enhanced oil recovery. Total installed costs for the project were estimated at $3.55 billion4. 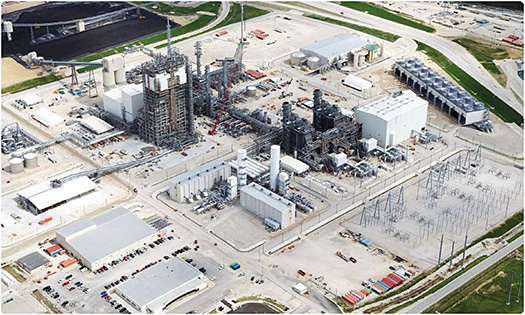 GreenGen Project
In April of 2012, China Huaneng Group, together with Peabody Energy of St. Louis, Missouri, demonstrated the successful startup of an IGCC plant located in Tianjin City, Bohai Rim, China. During official operation, the plant will convert 2,000 tons of coal per day to 250 MW of electricity. The IGCC plant, using Chinese HCERI gasification technology, is the first phase of the GreenGen Project; the second phase currently underway involves a smaller pilot plant that will send a clean stream of hydrogen through fuel cells and turbines to produce electricity, with carbon dioxide being captured for industrial use. The third phase, scheduled for 2015–20, would be a 400 MW power plant with full-scale carbon capture and storage in underground rock layers (over 80% of produced CO2 captured and stored). Ultimately, with all phases, power production from the GreenGen Project would total about 650 MW5.

Nakoso, Japan IGCC Demonstration
Construction began on this pulverized coal IGCC demonstration plant in August 2004. The plant, which uses Mitsubishi Heavy Industries' (MHI's) two-stage entrained-flow, pressurized, air-blown gasifiers, is located at the Nakoso Power Station in Iwaki City, Fukushima, Japan. Clean Coal Power Research and Development (R&D) Corporation, Ltd. began development in 2001, with the goal of proving an IGCC design for commercial use on a wide variety of coals that Japan imports. The plant came online in late 2007, and has been operating since that time, consuming 1,700 TPD coal and producing 250 MWe gross.

The project uses cyclone and porous filters to remove and recycle char back to the combustor. MHI lists the system's carbon conversion efficiency at 99.8%. The syngas is cleaned of sulfur and other trace contaminants by a commercial MDEA and COS unit. The sulfur is further processed into a saleable byproduct: high-grade gypsum.

During the years of plant operation, operability, continuity of operation, environmental performance, load variation/change, durability, reliability, and maintainability have been evaluated/proven. Economic evaluation continues, along with interest in assessing carbon capture and storage in plant context. The facility was damaged by the March 2011 tsunami but recovered fully by the end of that year6. The demonstration project was finished in March 2013, and the Nakoso IGCC plant is now operated commercially by Joban Joint Power Company as a high efficiency power generating station.

Syngas is cleaned, in part, by a Rectisol process unit. Acid gases from the Rectisol unit are used to produce sulfuric acid in a wet sulfuric acid (WSA) plant, added in 1993. Beyond electricity, the plant produces liquid byproducts like coal tar, phenol concentrate and liquid ammonia. Recently, a Siemens liquids gasifier was added to enable additional syngas production from these liquid byproducts, especially the coal tars. Economically this makes sense as the price of electricity is still higher than the value of the liquids. Additionally, gasifying the liquids allows for more syngas to be produced to counter the declining quality of coal from the local Sokolov mine8.

Finally, most of the foregoing examples and other IGCC facilities are examined in the following linked report, containing useful information and analysis: