The Puertollano integrated gasification combined cycle (IGCC) Plant is a 300 MW net demonstration project in Spain designed to use a 50/50 mixture of high-ash coal and petroleum coke. The plant first went into operation in December of 1997 and the gas turbine was first fired with synthesis gas (syngas)—produced by the plant’s gasifiers—in March of 1998.

Project Participants
ELCOGAS is a consortium of eight European utilities and three technology suppliers formed in 1992 to launch the Puertollano project with the goal of demonstrating the commercial feasibility of IGCC technology. The European Union selected it as a Target Project and provided funding through the THERMIE program, which is focused on taking short-term actions to provide reliable clean coal technologies for future power generation.

Site Description
The plant is situated in Puertollano, Spain, in the south central province of Ciudad Real, 125-miles south of Madrid. The site is about six miles east-south east of Puertollano and occupies just under 120 acres. Local supply of high sulfur coal and close proximity to the Puertollano Oil refinery were the main reasons for the site's location. Petroleum coke from the oil refinery serves as a low cost fuel for co-firing with coal. Besides being close to fuels, the area was also selected for being already a heavily industrialized area with adequate infrastructure for an IGCC plant, including an existing link to the national electrical and natural gas supply networks.

Coal used in the IGCC plant is supplied by the local ENCASUR mines. The coal is subbituminous, high ash content (41.1%) hard coal. The mine holds 60 million tons of coal reserves. 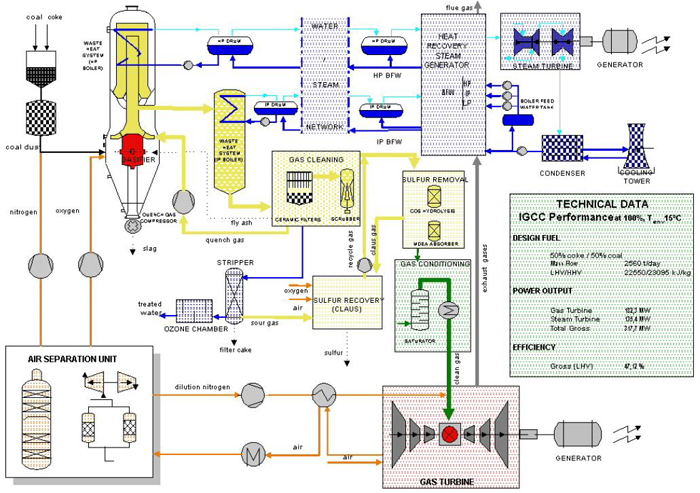 The ASU produces 85 % pure oxygen and pure nitrogen for use in purging and feeding the dry, pulverized fuel to the gasifier. The remainder of the produced nitrogen is compressed and used for diluting the syngas fed to the gas turbine. The ASU operates in a load following mode based on gasifier operation.

Coal is ground to particles of less than 50-60 microns in two roller mills. The coal is partly dried in the mills and further dried to a moisture content of less than 2% by weight via medium pressure steam and natural gas combustion. The dried coal is then sent through a lock hopper to bring it to gasifier pressure before being conveyed pneumatically to four side-mounted burners using high purity nitrogen from the ASU as a carrying medium.

Fuel is fed to a single Prenflo (pressurized entrained flow) gasifier via dry fuel dust feeding, where raw syngas is produced by reaction of the 50/50 coal and petroleum coke mixture with oxygen from the ASU at elevated temperature (1,200-1,600 °C or 2,200-2,900 °F) and pressure (363 psig). Carbon conversion for the gasifier is over 98%. Slag, containing less than 1% residual carbon, is removed from the gasifier through a slag crusher and lock hoppers. The raw syngas is quenched with a flow of cooled, particle-free, recycled syngas to a temperature of 900 °C, or 1,650 °F, upon leaving the gasifier. Following the quench, the syngas is then cooled in two water-tube syngas coolers to 236 °C, or 450 °F, generating saturated steam. Particulate matter in the syngas is then removed with a ceramic candle filter, and part of this stream is sent back for raw syngas quenching. The syngas is then scrubbed with water at about 165 °C, or 330 °F, to remove ammonia and halides. Acid gas removal is accomplished with a carbonyl sulfide (COS) hydrolysis unit and MDEA amine wash. Sour gas is converted to solid sulfur in a Claus unit, and tail gas from the Claus unit is hydrogenated before being recycled to the COS hydrolysis unit. The cleaned syngas, once sulfur and particulates are removed, is composed of 60% carbon monoxide (CO), 22% hydrogen (H2), 10% nitrogen (N2), 4% water (H2O), and 4% carbon dioxide (CO2).

Cleaned syngas is then sent to a Siemens V 94.3 gas turbine where it is fired along with nitrogen for nitrogen oxide (NOX) reduction. The heat recovery steam generator (HRSG) produces steam from the turbine exhaust gas at various temperatures and pressures, with the high temperature and pressure steam producing electricity in a steam turbine.

Environmental Considerations
The Puertollano IGCC Plant demonstrates the possibility of converting poor quality coal, with high ash content, along with refinery by-products of over 5% to electricity with minimal environmental impacts. NOX emissions are minimized by reducing combustion temperatures in the gas turbines via saturating the syngas with water and mixing it with nitrogen. Sulfur dioxide (SO2) emissions are reduced by 99% through desulphurization and selling elemental sulfur as a by-product. CO2 emissions are also reduced, due to higher thermal efficiency, down to 85 % of conventional coal power plants.

ELCOGAS, in cooperation with the University of Castilla la Mancha, Empresarios Agrupados, Técnicas Reunidas, INCAR-CSIC, and CIEMAT are planning to implement a pre-combustion pilot CO2 separation plant at the facility.

Cost/Schedule
ELCOGAS was incorporated in April of 1992, leading to the start of project activities in the following July. Construction of the plant began in April of 1993. The combined cycle portion of the plant began operations on natural gas in September of 1996, with first ignition of the gasifier occurring in December of 1997. First operation of the gas turbine on syngas was performed in March of 1998. In September of 1998, 98% of the nominal output of the plant with gasification was achieved. Total capital cost for the plant, neglecting interest during construction, worked out to $1,850 per kilowatt, in 1991 dollars.

The gasification system has proven to be flexible, handling a wide variety of fuels. The high-ash hard coal and petroleum coke mixture has produced consistent results. Demonstrations of adding biomass as a supplemental fuel were conducted. Load changes have been easily accommodated by the gasifier, and also syngas heating value has been demonstrated to remain nearly constant regardless of the fuel being used. Higher hydrocarbon formation has been limited to less than 1% by volume in the produced syngas. Non-leachable slag has been produced and fly ash is being sold to the cement industry. Perhaps most important, is that plant statistics have shown that the majority of plant down time is not caused by issues with the gasifier. A chart showing the availability and downtime of the various plant systems for 2007 is provided above.

Several issues were encountered during the operating history of the plant, which reduced availability and needed to be addressed through research and development.