Background
Particulate matter (PM) consists of microscopic solid particles or liquid droplets which are small enough to enter the lungs and cause health problems. Both nitrogen oxides (NOx) and sulfur oxides (SOx) are associated with the formation of particulate matter, but other processes can contribute to their formation. Aside from health concerns, particulates cause reduced visibility and haze when released in the atmosphere.

Ash is formed in coal combustion and gasification from inorganic impurities in the coal. Some of these impurities react to form microscopic solids which can be suspended in the exhaust gases in the case of combustion, or the syngas produced by gasification. In the latter case, raw syngas leaving the gasifier contains fine ash and/or slag that needs to be removed prior to sending the gas downstream for further processing. The bulk of the particulates are removed using dry particulate removal systems such as filters and/or cyclones. High temperature ceramic filters have been developed for gasification applications and are currently commercially available. The recovered fly ash/slag can either be recycled to the gasifier or purged from the system as a byproduct. The syngas leaving the dry particulate removal system is then further purified by passing through a wet scrubber where any residual solids can be removed down to a 1 ppm level.

Gasification offers two main advantages in particulate control over combustion processes. First, gasification of coal provides the capability of removing most of the ash as inert slag or bottom ash for disposal or sale as a byproduct. Second, since the syngas leaving the gasifiers is much more dense than combustion exhaust gases, the particulate matter can more easily be removed. The following figure gives an indication of the advantage that gasification has for particulate emissions. 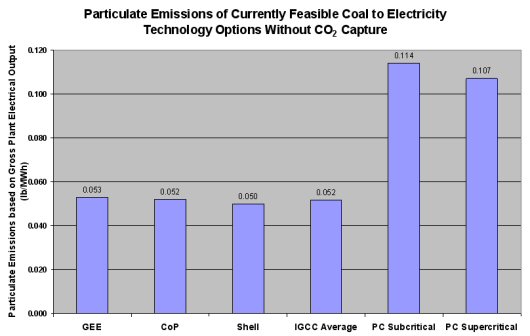 Dry Particulate Removal
Bulk solid particulate removal can be achieved with either filters and/or cyclones, depending on the gasification system and operating conditions. Cyclones are a commercially proven technology and can be refractory-lined for high temperature operations. High temperature candle filters have been developed and can remove particulates from raw syngas at temperatures between 550°F and 900°F (~ 300°C to 500°C). Below 550°F, the filters may be blinded by deposits of ammonium chloride. Above 900°F, alkali compounds may pass through the filters at unacceptable levels, as the vapor pressures of these compounds may still be high. Development of candle filters that can remove particulates at high temperatures is a significant technology development for gasification. Use of candle filters in dry solids removal systems is now considered commercially available technology. In some current gasification designs, candle filters are being used upstream of a wet scrubber for effective overall solids removal.

Effective dry particulate removal is an integral part of the warm gas cleanup (WGCU) technology development effort being undertaken by Research Triangle Institute (RTI) with funding from the Department of Energy (DOE).

Wet Scrubbing
In most commercial gasification operations, syngas leaving the filter is quenched and scrubbed with water for final particulate removal. Water scrubbing takes place below the dew point temperature of the syngas so that the finest solid particles can act as nuclei for condensation, thus ensuring that all solids can be removed efficiently. Scrubbing also removes chlorides, ammonia, some hydrogen sulfide (H2S) and other trace contaminants from the syngas. Typically, the scrubbed syngas is reheated for carbonyl sulfide (COS) hydrolysis and/or a sour water gas shift (WGS) if required, followed by cooling in a low temperature gas cooling (LTGC) system to generate low pressure steam. After these processes, the syngas is sent downstream for sulfur and mercury removal.

Spent water from the scrubber column is directed to a gray water treatment system where it is depressurized and vacuum flashed. The spent water is then decanted into a gravity settler to remove particulates. Solid-concentrated underflows from the settler bottom are filtered to recover the fine particulate as a filter cake, which is then either discarded or recycled to the gasifier depending on its carbon content. Water from the settler is recycled for gasification reuse, with excess being sent to the wastewater treatment system for disposal.

Regulatory Constraints on PM at Edwardsport IGCC
Current regulations on filterable PM from new IGCC units set the limit at 0.07 lb/MHh (syngas + syngas duct firing) and 0.09 lb/MWh (syngas + natural gas duct firing). Edwardsport is 0.019 lb/MMBtu;1 with heat rate of 4,218 MMBtu/hr this is equivalent to a limit of 80.1 lb/h. Actual emissions of PM/PM10/PM2.5 at Edwardsport are estimated to be 36.0 lb/h with SCR engaged and 39.1 lb/h with SCR disengaged, both well under the limit.