The Wabash River Coal Gasification Repowering Project is one of two demonstrations of advanced integrated gasification combined cycle (IGCC) technology in the United States. It was selected by the U.S. Department of Energy (DOE) in September of 1991 as a Round IV Demonstration Project for the Clean Coal Technology (CCT) Program. The IGCC plant is a repowering facility in the sense that it was built to replace a dated conventional pulverized coal power plant. Construction began in July of 1993 near West Terre Haute, Indiana, followed by operational startup in November of 1995. The project demonstration phase was completed and turned over for commercial operation in December 1999. In 2005, the plant was re-started under new management. SG Solutions LLC (SGS) owns and operates the Syngas Plant, whereas Wabash Valley Power owns the power generation portion of the plant, which is operated by Duke Energy.

The Wabash River Coal Gasification Project Joint Venture was formed in 1990 by Destec Energy, Inc. of Houston, Texas and PSI Energy. PSI Energy was an investor-owned utility whose service covered 62 of the 69 counties in Indiana. Along with Cincinnati Gas & Electric Company, PSI was owned by Cinergy Corporation, formed in 1994 and acquired by Duke Energy in 2006. Destec was purchased by Houston-based NGC Corporation, in 1997, and changed its name to Dynegy, Inc. the following year. In December of 1999, Global Energy Inc. purchased Dynegy’s gasification assets and technology. This included Dynegy’s synthesis gas (syngas) facility at the Wabash River Coal Gasification Repowering Project, as well as the right, title and interest in Dynegy’s proprietary gasification technology and related patents. Dynegy’s gasification projects in development at the time were also part of the acquisition. In 2005, the facility was handed over to SGS, who currently owns and operates the plant. 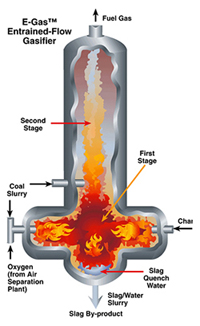 The gasification technology, developed originally by Dow Chemical, was first applied to power applications at its Plaquemine, Louisiana, chemical complex. Following implementation at this facility, the technology was transferred to Destec, a partially held subsidiary of Dow Chemical. The technology was later acquired by ConocoPhillips. CB&I currently licenses this process technology under the name E-GAS™.

Site Description
The demonstration site is located in a predominantly rural area on the Wabash River outside of West Terre Haute, Indiana. PSI’s Wabash River Station was originally a mine mouth plant, and most of the new facility is built over land which was previously shaft-mined in the early 20th century. The site is bounded by the Wabash River to the east, woodlands and agricultural areas, a reclaimed strip mine, and residential areas 0.2 miles to the southeast and 1.5 miles to the north. Downtown Terre Haute is about eight miles south and there are no nearby wilderness areas or national or state parks. The coal gasification repowering facility is located immediately northwest of PSI’s Wabash Generating Station on land which was donated by the Peabody Coal Company. This 15 -acre plot contains the gasification island, air separation unit, water treatment facility, and the gas turbine and heat recovery steam generator (HRSG) tandem are located adjacent to the existing station. A previously used ash pond was converted for wastewater and storm water use.

The Wabash River IGCC Power Plant is designed to use a variety of local coals with maximums of 5.9% sulfur content (dry basis) and a higher heating value of 13,500 Btu/lb (moisture and ash free). A high-sulfur Midwestern bituminous coal from the No. 6 seam at Peabody’s Hawthorn Mine in Indiana was selected for initial operation. In addition, petroleum coke and blends of coal and coke were tested at the facility.

Plant Description
The design for the gasifier used in this project was based on Destec's Louisiana Gasification Technology, Inc. (LGTI) gasifier, which was of similar size and operating characteristics. The LGTI gasifier was operated for more than 34,000 hours from April 1987 through November 1995. Experience gained in that project was considered in the design of the Wabash River facility and eliminated much of the risk associated with scale-up and process variables.

Coal is first slurried with water and fed with 95%-pure oxygen to the first stage of the gasifier. The coal is partially combusted in this stage to maintain a temperature of approximately 2,500 °F (1,371 °C). The majority of the coal reacts at this temperature with steam to produce the raw syngas. Ash in the coal melts and flows out of the bottom of the gasifier vessel as slag. Additional coal slurry is added to the second gasification stage where it undergoes devolatilization, pyrolysis, and partial gasification to cool the raw syngas and enhance its heating value. The raw syngas is then further cooled to produce steam for power generation. The steam is generated at a pressure of about 1,600 psia.

Environmental Considerations
DOE analyzed environmental issues associated with the project according to National Environmental Policy Act (NEPA) standards. In addition, PSI, Destec, and two environmental consulting firms prepared a detailed environmental information volume providing inputs to an Environmental Assessment for the project. A positive NEPA assessment led to DOE issuing a Finding of No Significant Impact in May of 1993. All Federal, state, and local permits and approvals were obtained in combination with the establishment of a process and environmental monitoring program.

Plant design was conducted with the goal of outperforming the Clean Air Act (CAA) emission standards, which limit sulfur dioxide (SO2) at 1.2 lb/million Btu of fuel input and NOX at 0.15 lb/million Btu. Demonstrated emissions are much under these targets (see linked report below).

Despite power generation at the Wabash River complex being almost three times that of the original unit, the total emissions are a fraction of the pre-powering values as a result of the IGCC system.

Cost/Schedule
Total cost of the project was $438 million, which included construction and operation during the four-year demonstration period. DOE provided $219 million (50%) of the total cost.

A cooperative agreement was reached between Wabash River and DOE in July of 1992 with construction beginning in July of 1993. Operation commenced in November of 1995 and the completion of demonstration activities and turnover to commercial operations began in January of 2000. Unusually severe weather hampered activities in the first year of the construction phase of the project. Seven-day construction schedules were employed with peak construction activity reaching over 1,000 workers on site daily.

Operational History
Over the course of the demonstration, the Wabash River Project processed 1.5 million tons of coal, generating more than 4 million MWh of electricity. Thermal efficiencies of the plant were 39.7% for coal and 40.2% for petroleum coke (higher heating value basis). Plant availability averaged 70% in 1998-99, reaching as high as 77% in any given nine-month average. The plant demonstrated stable operation and was successfully operated on baseload dispatch in the PSI system.

Initial operations found several problems that have been addressed successfully. Improvements in rod mill operation and installation of a new burner resulted in increased carbon conversion, reducing carbon in the slag from about 10% to around 5 %.

Ash deposition at the inlet to the firetube boiler was corrected by modifying the hot gas path flow geometry and velocity. Breakthrough of particles in the barrier filter system was corrected by replacing the ceramic elements with metallic candles. Early replacement of the COS hydrolysis catalysts, due to poisoning by chlorides and metals, was remedied by the installation of a wet chloride scrubber system and a change of catalyst.

A new mechanical method for cleaning boiler tubes was developed to reduce corrosion and decrease filter blinding. Acid gas removal was improved by expanding the system capacity for removing heat-stable salts from the circulating amine solution.

The expansion bellows between the syngas module and the turbine required redesign to eliminate cracking flow sleeves. Solenoid valves in the syngas purge lines were also redesigned and replaced. Replacement of the fuel nozzles was selected as a solution to cracking combustor liners.