What is Black Liquor?
Industrial paper manufacture involves a procedure known as the Kraft process, where wood is converted into wood pulp and then into paper. The process, however, produces a toxic byproduct referred to as black liquor. This primarily liquid mixture of pulping residues (like lignin and hemicellulose) and inorganic chemicals from the Kraft process (sodium hydroxide and sodium sulfide, for example) is toxic and until the invention of recovery boilers in the early 20th century was often simply released into waterways. Recovery boilers allowed paper manufacturers to recover and reuse the inorganic chemicals and extract energy from the pulping residues. Many of these boilers were built in the 1960s and 70s and will need to be replaced sometime in the next few decades. The replacement of these boilers brings new interest in producing not only steam and electricity, but perhaps also fuels and chemicals via gasification of black liquor.

Also see gasification of biomass, as the paper manufacturing industry has access to large amounts of other forest residuals aside from just black liquor.

For perspective on how much black liquor is produced, one third of all pulping mills in the United States produce 6 million lbs/day of black liquor each. The black liquor is typically 15-20% solids by weight and these so-called "black liquor solids" contain about half the energy of the original woodchips. The older method to recover this energy involved concentrating the solution to about 75-80% solids by weight and then burning in a recovery boiler to generate steam. A gasification system, however, can feed the liquor into a high-pressure gasifier to produce electricity, steam, or potentially any other gasification product. This solves many of the difficulties associated with feeding other biomass feedstocks.

Black Liquor Gasifiers and System Integration
Pulping plants represent a substantial opportunity for integration with gasification. The paper manufacturing industry already has systems in place for handling biomass and gasification allows for its more efficient use. Black liquor gasification can provide some of the electricity and steam needs required by the pulping plant and can perhaps, in the case of a biorefinery, be tailored to produce salable liquid fuels or chemicals. Integration with an existing plant can also lower the initial capital costs of constructing a gasification facility and is generally easier to license than a new ("greenfield") plant.

The Kraft process chemicals in black liquor and the high temperatures of gasification (around 950°C) exert tremendous strain on the gasifier itself, especially the heat resistant refractories that line the reactor (a problem discussed elsewhere). Refractories can see as much as 40% material loss from the harsh environment. Current refractories often force the plant to shut down for maintenance/replacement on a six-month schedule rather than synchronizing with many existing 12-month plant maintenance schedules. The U.S. Department of Energy (DOE) is developing new refractories to improve gasification of black liquor. The factsheet entitled EERE- Advancement of High Temperature Black Liquor Gasification Technology [PDF] (Apr 2006) describes the research project while the paper entitled EERE - Refractory for Black Liquor Gasifiers [PDF] (Apr 2006) describes the problem and gives background on black liquor gasification.

Black liquor can be gasified and then combusted in a turbine to generate electricity. With a heat recovery steam generator (HRSG), the plant can be run in a combined cycle, similar to an integrated gasification combined cycle (IGCC). This specific configuration using black liquor is sometimes called a black liquor gasification combined cycle (BLGCC). If integrated into a pulping mill, BLGCC can be scaled to provide as much power or steam as possible from the black liquor input or the turbine can be co-fired with natural gas to produce extra electricity. The BLGCC represents a much more efficient means of electricity production than the older, more commonly used recovery boilers. 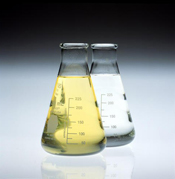 Syngas from black liquor gasification can also be used to synthesize liquid fuels or chemicals. The Princeton study developed seven black liquor gasification synthesis designs: three variations on dimethyl ether (DME) production, three Fischer-Tropsch liquid fuel (FTL) plans, and one for mixed alcohols (methanol, ethanol, etc.). When using black liquor (or biomass in general) this type of facility is often called a biorefinery. The study (linked above) indicated that an integrated pulp mill/liquid fuels gasification system could reduce the cost to produce a biofuel to approximately $1 per gallon of ethanol equivalent.

The paper does suggest that at the scale of most paper mills, black liquor gasification for power production may be more economical than liquid fuel synthesis, which would benefit from a larger scale.