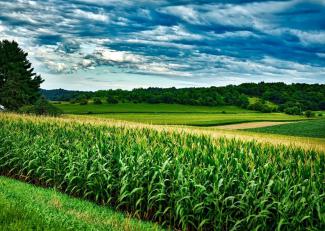 According to the U.S. Department of Agriculture, global fertilizer prices are at near record levels and may remain elevated throughout 2022 and beyond, resulting in higher food prices at supermarkets, smaller crop yields and shortages of some commodities.

“NETL’s new class of pre-combustion solvents is a game-changer because of its tremendous upside to address multiple priorities — from lowering the cost of carbon dioxide (CO2) capture to impact climate change to reducing wear and tear on industrial infrastructure and helping farmers by addressing skyrocketing price increases for fertilizer,” said Nicholas Siefert, principal investigator of the technology and a member of the Lab’s Reaction Engineering Team.

NETL was awarded a non-provisional patent and recently submitted another patent application for low-cost, low-vapor pressure and low-corrosion hydrophobic solvents that selectively capture both CO2 (a greenhouse gas and precursor for urea fertilizer) and hydrogen sulfide (a precursor for sulfur-containing fertilizers) from industrial streams at high pressure. These streams include synthesis gas (syngas) generated from solid fuel gasification, steam methane reforming (SMR) and reforming hydrocarbons at chemical refineries.

Drawing on the many different scientific and engineering disciplines within the Lab, NETL researchers have created solvent materials that may provide superior performance compared to existing commercial capture solvents, particularly in the area of reduced corrosion on steel components.

One of the drawbacks of today’s commercial solvents is the requirement to lower initially high-temperature syngas to below room temperature, an inefficient and costly process. The primary advantages of NETL’s new solvents are their low vapor pressure, their lack of affinity for water and their low corrosive impact on carbon steels, all of which allow these solvents to operate at above room temperature and to be regenerated using waste heat at the plant. Other important parameters of the solvents, such as viscosity, stability and gas solubility, are all similar to the commercial materials.

The NETL technology and solvents being synthesized are expected to be economically viable replacements for existing commercial solvents in pre-combustion capture of CO2 without requiring the syngas to be cooled below ambient conditions. In addition, NETL’s solvents can be regenerated using waste or low-grade heat, which allows net electrical energy savings at a power plant or industrial facility equipped with pre-combustion CO2 capture.

The impact of NETL’s advancements will have positive benefits for utility operators who own or manage integrated gasification combined cycle power plants, SMR chemical plants, the environment, the agriculture industry and consumers.

“When these solvents are coupled with hydrogen-selective membranes being developed at NETL, CO2 capture rates of greater than 98% are achievable at gasification and SMR operations,” Siefert said.

Prices for raw materials to produce fertilizers — including ammonia, nitrates, sulfur, phosphates and potash — have risen dramatically worldwide. “By effectively removing the CO2 and hydrogen sulfide from syngas, operators of gasification plants and chemical refineries will have a clean source of hydrogen, which can be combined with nitrogen to produce ammonia on-site,” Siefert said.

“This supply of materials for fertilizer production provides plants with the opportunity to sell multiple fertilizer options as an added revenue source that could be combined with recently signed CO2-storage federal tax credits to lower their carbon-reduction costs,” Siefert said.

CO2, after being dissolved in water, can corrode equipment and damage the integrity of steel. In its research, NETL found that its patented hydrophobic solvents have low corrosion rates, which means low-cost carbon steel rather than expensive stainless steel can be used in equipment such as contactors in which fresh solvent and syngas are mixed.

NETL-developed solvents have been tested at an existing coal gasification pilot plant facility at UND-EERC and in a slip stream of synthesis gas at the National Carbon Capture Center in Wilsonville, Alabama.