Power plants that combust or gasify solid fossil fuels generate large quantities of solid residues, principally ash, slag and desulfurization/sulfur byproducts. More specifically, coal-consuming electric utilities have produced 70-100 million tons of coal utilization byproducts (CUBs) annually in the United States in past years (though increase in use of natural gas for power generation has caused a recent downward trend in production of CUBs). Since 1966, the American Coal Ash Association (ACAA) has prepared annual surveys of CUB production and consumption by its members, which consist primarily of coal-burning electric utilities. These surveys concern the highest-volume CUBs: fly ash, bottom ash, boiler slag, and flue gas desulfurization (FGD) by-products. The data are instructive in indicating trends in production and usage of these by-products in major applications. Table 1 shows the production and use figures for 2020. 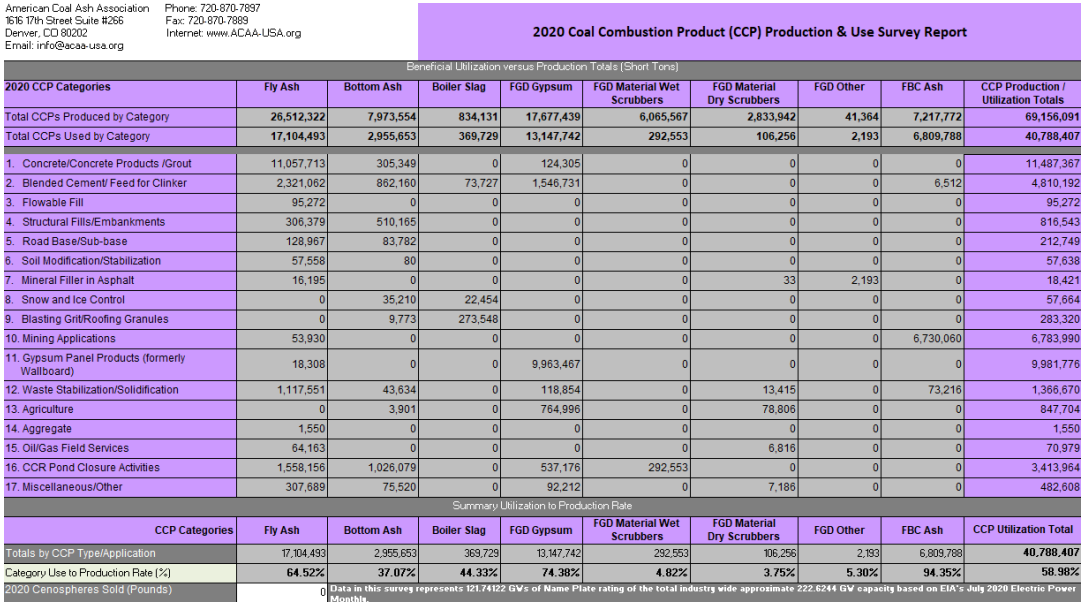 The ACAA data show that fly ash from conventional coal combustion is the single largest material by category to be produced. Much of this (64.5%) is gainfully utilized in applications such as concrete aggregate, structural fill, etc., though the remaining 35.5% is disposed of in ponds and landfills. Because constituents can subsequently leach from disposed wastes, there is potential for components to migrate to surface and ground waters. Groundwater contamination can occur when rainwater percolates through waste, separates (or leaches) hazardous constituents from wastes, and carries the hazardous constituents into the groundwater supply. Also, accidental releases from coal ash ponds have occurred with regrettable environmental consequences, exemplified by the TVA Kingston coal ash slurry spill in 2008 and Duke Energy’s Eden, North Carolina (Dan River) ash release in 2014.

A review of 46 power plant disposal sites from 12 states in the USA and abroad demonstrated that a number of different waste disposal sites had one to several constituents exceed the U.S. Environmental Protection Agency's (EPA) MCL, SMCL or WQC1 limits by an order of magnitude or more in down-gradient wells, ash pond effluents, aquatic receiving systems, etc.2 Given this type of concern, EPA had initially decided that federal regulations were needed due to some evidence of contamination from power plant wastes, the significant inconsistencies in disposal standards between states, and different disposal methods being used (storage in landfills vs. strip mines), and strong public support for such standards. However, in the Spring of 2000, EPA reached its final decision on whether federal regulations should be established to set the minimum safeguards required at all power plant waste disposal sites, issuing a Final Regulatory Determination that regulation of ash as a hazardous waste was not warranted, and determined that voluntary Resource Conservation and Recovery Act (RCRA) Subtitle D (nonhazardous) national standards would need to be developed for CUBs disposed in landfills or surface impoundments and used in filling surface or underground mines. They also determined that no additional regulations were warranted for CUBs that are used beneficially (other than for minefilling). In the regulatory determination, EPA supported increases in beneficial uses of CUBs, such as additives to cement and concrete, waste stabilization, and use in construction products.

The result of EPA’s determination was a marked trend observed in the following years, in which CUBs use volume increased from 32.1 million tons in 2000 to a peak of 60.6 million tons in 2008. However, in 2008 the TVA Kingston coal ash slurry spill occurred, which prompted EPA to commence rulemaking which caused regulatory uncertainty over coal ash utilization (prompting decreases in CUBs use of 51.9 million tons in 2012, down from 56.6 million tons in 2011 and well below the 2008 peak3). However, in a recent Consent Decree signed by all of the parties to a federal lawsuit that sought to compel a deadline for EPA, the Agency agreed to a December 19, 2014, deadline and continued to signal that its final regulation would be promulgated under the “non-hazardous” Subtitle D of RCRA pertaining to coal combustion residuals. In July 2016, EPA signed a direct final rule on disposal of coal combustion residuals, which because effective October 2016.4 Beneficial use of residuals is an important aspect of the recently finalized CCR Disposal Rule,5 which has demonstrated that regulatory trends and the need to better protect the environment, as well as public sentiment, clearly favor power generation technologies that can demonstrate safe disposal or beneficial use of solid by-products.