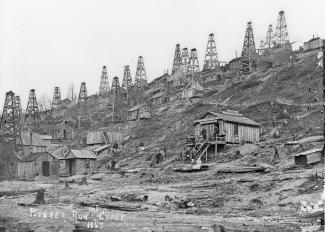 NETL has developed an easy-to-use online story map that explores how northwestern Pennsylvania became the birthplace of the modern petroleum industry and the efforts taken by Laboratory scientists to address the ongoing environmental issues from the region’s oil boom more than 150 years ago.

The NETL project, “Rediscovery of Abandoned Wells in the World’s First Oil Field,” is a web-based resource that reviews the early development of the oil industry in Venango County and the environmental damage that followed. The story map also walks users through the strategies deployed by NETL researchers to address the area’s proliferation of abandoned wells — some of which continue to emit methane, a potent greenhouse gas, decades after they were taken out of production.

The website is interactive and can be used to access the Orphan Well Location Survey, a public tool to forward photos, GPS coordinates and other information about abandoned oil and gas wells anywhere in the United States to NETL researchers.

The Lab has worked closely with state officials to find abandoned wells in Oil Creek State Park, document their locations and determine if they leak methane and other gases. The story map begins with a brief history, illustrated with photos from state archives, about the drilling of the first commercial oil well by Edwin Drake in 1859 in the Oil Creek Valley near Titusville, Pennsylvania.

Drake’s success triggered an oil boom, but its impact on the landscape and environment was devastating. Over time the Oil Creek Valley has returned to its natural, forested state. However, despite significant restoration efforts, hundreds of abandoned oil wells remain in the area.

NETL’s Natalie Pekney, Ph.D., whose team worked on the story map, said finding abandoned wells, many of which were drilled before environmental laws were enacted and were never documented on public maps and records, is of critical importance.

“In many instances, the earth and soil around these old wells is unstable, which poses a significant safety threat to wildlife and unsuspecting hikers. But old wells also can leak methane, a potent greenhouse gas that contributes to climate change,” explained Pekney, technical portfolio lead, Geological and Environmental Systems Division
Field Monitoring Team.

“The amount of methane leaking from a single well may be small. But the U.S. Environmental Protection Agency (EPA) estimates there are 1.2 million abandoned wells across the United States, which means the total amount of methane they leak is a significant concern,” Pekney said.

The story map highlights the use of drones and airborne magnetic surveys to detect the unique magnetic signatures of steel well casings in Oil Creek State Park. As part of a project led by NETL, a helicopter outfitted with magnetometers flew 1,320 kilometers over the park to create a “bump map” showing areas of high magnetic intensity typical for vertical steel-cased wells. The magnetic data were then processed to provide coordinates for likely well locations, many of which were buried or concealed by dense vegetation.

Because a magnetic survey relies on an intact metal casing, the tool is not effective for detecting wells that were constructed with wooden casings or have had the casing removed. In some instances, these wells may still have surface indications such a flat area where drilling machinery was located or a depression caused by the collapse at the well head.

Subsequent sections review how NETL scientists tested abandoned wells for methane emissions and the presence of other gases, including ethane, propane, and pentane and butane, and collected samples.

NETL researchers will discuss their recently completed Oil Creek State Park story map, as well as efforts using drones, helicopters, LiDAR and electromagnetic methods to locate abandoned oil and gas wells, on Thursday, March 19, 2020, at the Drake Well Museum and Park near Titusville, Pennsylvania. Doors open at 5:30 p.m., followed by the lecture at 6:30 p.m. The NETL presentation, titled “Drone Detectives,” is part of the museum’s Wisdom and Wine lecture series. Admission is $5 for the lecture only and $10 for the wine tasting and lecture. For directions and more information, visit the museum website or call 814-827-2797.