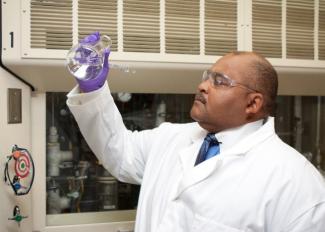 NETL’s McMahan Gray will be presented with a prestigious honor from the institution where he learned critical skills to thrive as a nationally renowned research scientist.

The Chemistry Department at the University of Pittsburgh recently announced it will present Gray, a physical scientist 1980 alumnus, with its 2020 Distinguished Alumni Award at a ceremony to be held next fall.

In his letter nominating Gray for the award, NETL Director Brian J. Anderson, Ph.D., noted that Gray has advanced innovative technologies to save lives while serving as a mentor who has inspired hundreds of students and colleagues.

“Gray’s long commitment to innovating new technologies that improve the world’s air, water and the economy coupled with his dedication to training future scientists to carry the work forward makes us proud to have him at NETL. This recognition shows that this pride extends beyond our organization to his alma mater as well. As a key federal researcher, he is an active participant in the Laboratory’s work to prepare the next generation of scientists, engineers and researchers to tackle emerging energy challenges,” Anderson stated.

Anderson and leaders from academia and industry, who also sent nomination letters to Pitt, praised Gray for his development of the basic immobilized amine sorbent (BIAS) process to remove carbon dioxide (CO2) from power plant emissions.

Gray then advanced the technology to develop other uses for BIAS. For example, he adapted BIAS to create a product that can remove heavy metals, including lead, from water.

“NETL is in the problem-solving business, and, as one of our more productive researchers, Gray has made significant progress on solving a dilemma that has puzzled American cities for a long time — how to remove lead and other heavy metals from water supplies,” Anderson stated.

In addition to a home-based application, the technology can be used to treat municipal and industrial wastewater on a larger scale. BIAS technology has demonstrated the potential to recover rare earth elements (REEs) — essential components of modern technological devices such as cell phones and computer hard drives — from water and waste streams.

Gray is listed as the primary or secondary inventor on 21 patents, and his work has been cited in more than 120 scholarly papers.

He has received multiple awards, including the Federal Laboratory Consortium Mid-Atlantic Region Award for Technology Transfer, the Federal Laboratory Consortium National Award for Excellence in Technology Transfer and an R&D 100 Award. He has also received the Hugh Guthrie Award for Innovation as one of NETL’s leading scientists. In 2018, he was awarded a Gold Medal for “Outstanding Contribution to Science (Non-Medical)” from the Federal Executive Board for Excellence in the Government. Gray was a 2019 Service to America Award Finalist.

For nearly a decade, Gray provided service to America’s Historically Black Colleges and Universities by working as a program chairman and technical reviewer for a range of projects. He also has worked with institutions of higher education, such as the University of Kentucky, Pitt and Penn State University, as a technical project officer to guide and monitor projects that provide key experience for aspiring energy researchers.