The goal of this project is gain a better understanding of methane degradation and methane-degrading microbes in order to improve predictive models of methane fluxes in the Arctic.

This project will estimate rates of methane degradation and examine methanotrophic microbes present in arctic coastal sediments and the water column. Because of their large reservoirs of methane and methane hydrates and their sensitivity to climate change, arctic coastal oceans are an important potential contributor to atmospheric methane release. In addition to direct effects of temperature on methane hydrate stability, increasing temperature has contributed to decreasing sea ice in the Arctic over the last decade, which could lead to even higher methane fluxes to the atmosphere in the near future. This project will help to fill in critical gaps in our understanding of methane fluxes in the climate-sensitive environment of the Arctic.

The results of this work could help to improve models for predicting methane fluxes in a globally changing environment. The proposed work will add substantially to the data set on methane degradation rate estimates and molecular characterization of methanotrophic microbes. Both types of data are not extensive in any environment, but the Arctic is especially under-sampled, even though the presence of large methane reserves is well-known.

On September 26, 2009, the U.S. Naval Research Laboratory (NRL)—in collaboration with the U.S. Department of Energy National Energy Technology Laboratory (NETL), the Royal Netherlands Institute for Sea Research (NIOZ), and a team of 32 university and government scientists from the U.S., Netherlands, Belgium, and Germany—completed a first-of-its-kind expedition in the Beaufort Sea. During the expedition, 272 samples were collected for molecular analyses of genes and mRNA for methane degradation and other microbial processes. Incubations for methane degradation were completed on board the ship as soon as the sediment cores were available and then the incubations were killed and subsampled aboard ship. All samples were successfully shipped back to Delaware without incident. The Cruise Report provides details on the samples collected and other aspects of the September expedition. The 12-day Methane in the Arctic Shelf/Slope (MITAS) expedition represents the first step in a more thorough evaluation of the distributions and concentrations of methane and methane hydrates in the arctic permafrost and oceans.

Microbial and biogeochemical data from several cores collected during the MITAS expedition were analyzed in order to select the best core samples for gene sequencing. The microbial data included genes for aerobic (pmoA) and anaerobic (mcrA) methane degradation. Two cores were selected, and from them about 40 samples along the length of the cores were sequenced to identify the microbe communities. The sequencing resulted in identification of about 10,000 types of microbes. Observations indicate extremely high diversity and include many bacteria that have been seen in other methane-rich environments and deep-sea sediments.

The principal investigator (PI) has initiated two activities that help support the NETL-supported work. First, a web site ((http://www.ocean.udel.edu/cms/dkirchman/Arctic/index.htm) was developed to summarize the research activities in the Arctic, including this NETL project.

The second effort by the PI resulted in a contract with DOE's Joint Genome Institute (JGI) Community Sequencing Program (CSP) to obtain metagenomic sequence data from samples collected during the summer 2009 expedition in the Beaufort Sea. The CSP (http://www.jgi.doe.gov/CSP/) was created to provide the scientific community with access to genome sequencing data relevant to the DOE mission and issues in global carbon cycling, alternative energy production, and biogeochemistry. Five core samples were isolated for metagenomic sequencing by the JGI Preliminary analysis of the metagenomic data has revealed a complete pathway for sulfate reduction at depths. Ultimately, the metagenomic and 16S rRNA gene data will be combined with other microbial and biogeochemical data to obtain a complete picture of methane degradation and other biogeochemical processes in these methane-rich sediments.

Researchers have completed the analysis of total prokaryote abundance by direct microscopy and abundance of bacteria and archaea by quantitative polymerase chain reaction (PCR), a scientific technique in molecular biology to amplify DNA. 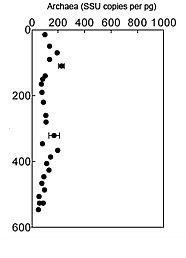 The final metagenomic sequence data were delivered by DOE's JGI in January 2011. These data have been analyzed by the MG-RAST metagenomics server at Argonne National Lab from which phylogenetic and functional classification results were obtained.

The project utilized several genetic sampling techniques to examine the microbial communities in the sediments from the Beaufort Sea collected during the Methane in the Arctic Shelf (MIDAS) expedition in September 2009. Fifteen cores were taken during the expedition, but two were taken as the focus of this analysis: one with low and one with high methane concentration. The project found that the taxonomic and functional make-up of the microbial communities were quite different in the cores with high methane concentrations compared to those with low methane concentrations. Analysis indicated that archea were much more abundant in methane-rich sediments than in methane-poor sediments though there was no obvious trend with depth. In contrast, sulfate reducers were found to decrease with depth.

(May 2012)
The project is complete. This project has taken a large volume of data collected during the MIDAS expedition and performed a variety of genetic sequencing techniques to determine microbial communities in the sediments. It was one of the first research projects to report metagenomic data from sediments dominated by ANME-2 archaea and is one of the few to examine the entire microbial assemblage potentially involved in anaerobic methane oxidation. The final report is available under “Additional Information”.

In addition to the information provided here, a full listing of project related publications and presentations as well as a listing of funded students can be found in the Methane Hydrate Program Bibliography [PDF].