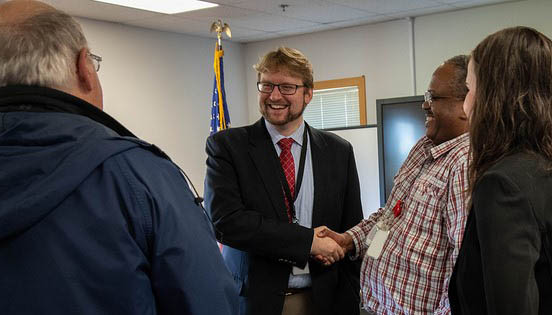 Odd traditions are observed at this time of year all over the world to mark the end of the year and to express good wishes for the beginning of a new one. For example: In Denmark, they save all their unused dishes and plates and then shatter them against the doors of friends and family as an expression of best wishes. In Ecuador, they celebrate the New Year by burning paper filled scarecrows at midnight. There’s a village in Peru where residents engage in a mass fist fight to settle differences and then start the year off with a clean slate.

On the other hand, the tradition at NETL is for the director to offer a few thoughts about the previous year’s success and provide a look forward. That’s obviously less messy than those other examples so I am happy to participate.

I may be new to the director’s chair at NETL, but I am no stranger to the important work that goes on in the Albany, Morgantown and Pittsburgh facilities. As a West Virginia native with a grandfather who made his living underground in coal mines, fossil energy and its continued importance to the American economy has always been a point of fascination for me, and the work of NETL has long been on my radar. While doing graduate work at MIT, I worked with NETL researchers on exploring the potential of methane hydrates and, over the ensuing years, I continued to be involved with important NETL initiatives from my energy research post at West Virginia University.

Because of that familiarity with much of the groundbreaking work and impacts originating at the Laboratory, I’ve spent the past few weeks getting to know more about the people of NETL. It’s been an exciting time to become more immersed in the Lab’s exciting efforts and get to know its people. I continue to be impressed with the welcome I have received and the unique talent and ability that is resident in our Laboratory. The past year’s successes lend ample evidence as to why I remain so motivated to be a part of the team. Here are a few examples.

That’s just five examples from an extensive list of exciting accomplishments, and I am certain that 2019 will present even more advances in support of the nation’s ongoing goal of pursing environmentally sound fossil energy innovations that bolster the economy and provide energy solutions for a secure and prosperous future.

As we close out 2018, I look forward to a bright future for NETL and the important work our people do for America.