Research is active on the technology titled, "Controlling Au25 Charge State for Improved Catalytic Activity." This technology is available for licensing and/or further collaborative research from the U.S. Department of Energy’s National Energy Technology Laboratory.

Managing carbon dioxide (CO2) emissions is a major technical challenge associated with the use of fossil fuels. Catalytic conversion of CO2 into valuable intermediates, such as methane, methanol, and carbon monoxide (CO), can be employed to help offset carbon capture costs while reducing greenhouse gas emissions. These intermediates may be used directly or subjected to further chemical processing.

This invention describes a method for the control and isolation of differentially charged gold (Au25) nanocatalyst clusters from a mixed solution. The method uses photoexcitation of the Au25 cluster in the presence of oxygen and a counter ion to specifically control the charge state of the catalyst. The method also describes the incorporation of nanocatalysts onto a support structure for charge-dependent reactivity. Charge specific Au25 clusters have been demonstrated to convert CO2 to CO with 99 plus percent efficiency and at catalytic rates that are approximately 10 to 100 times greater than other state-of-the-art electrocatalytic technologies. Charge-state dependent reactivity has also been shown to enhance the reduction of O2 and the oxidation of CO.

Overall, the technology provides a way of creating catalysts with precisely controlled charges, which directly impact catalytic activity. The improvement in catalytic rates, efficiencies, and selectivities directly address core technical issues that have prevented the development of effective and scalable electrocatalytic technologies for CO2 utilization. 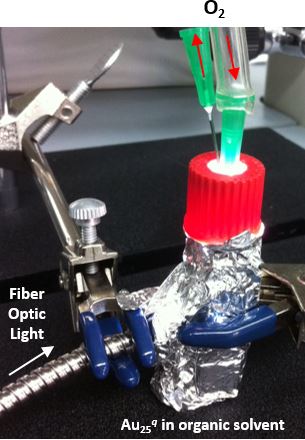