Research is currently active on the patented technology titled, “Noble and Precious Metal Nanoparticle-Based Sensor Layers for Selective H2 Sensing.” This invention is available for licensing and/or further collaborative research from the U.S. Department of Energy’s National Energy Technology Laboratory.

The ability to selectively sense hydrogen (H2) is important for a broad range of applications spanning energy, defense, aviation, and aerospace. One of the most significant needs is for sensors that are capable of H2 leak detection at levels up to the lower explosive limit (~4% in ambient air). Optical-based sensors offer distinct advantages for H2 sensing including broadband wavelength and distributed interrogation compatibility, resistance to electromagnetic interference, and the elimination of electrical wires and contacts, which are commonly associated with sensor failure and a potential safety concern for application in explosive gas atmospheres.

Palladium (Pd) and Pd-alloy thin films are the most common materials used for optical H2 sensing applications due to the dependence of the optical constants of Pd on ambient H2 concentration. This invention describes the development and use of thin film functional sensor layers integrated with optical based waveguide sensors for H2. The new sensor films consist of noble or precious metal nanoparticles such as Pd or Pd-alloys incorporated into a dielectric matrix to stabilize them while still providing access of H2 to the nanoparticles for operation as a functional sensor element. The companion film is a largely transparent (i.e., non-absorptive) dielectric material in the wavelength range of interest that exhibits high stability under harsh chemical and high temperature conditions with extremely limited diffusion of species other than hydrogen. The new nanocomposite systems described in this invention have been shown to have high sensitivity and selectivity for H2.

Pd nanoparticle-based H2 sensing layers have a number of potential advantages as compared to continuous thin films including response time, sensitivity, and stability of the microstructure at high temperatures or during H2 loading and unloading cycles as well as the ability to tune the optical constants of the sensing layer for optimal response in an optical sensing device platform. 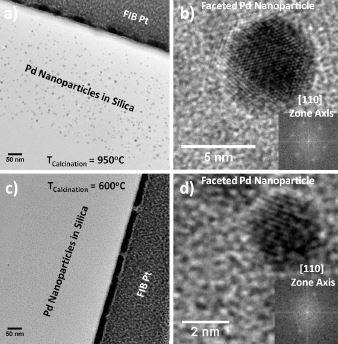