The objective of this research is to derive some key relationships among fluid properties, operating conditions, and hydrate plugging tendencies of crude oil systems. From these relationships and correlations, tools will be developed to better address the risk of hydrate plugging for a given system, therefore resulting in better planning and implementation of hydrate management strategies. The program will mainly focus on oil-water dispersion characteristics and their relationship to plugging behavior, as well as slurry flow modeling and dissociation studies for different fluids. Gas-dominated restarts in a low spot in a pipeline will also be conducted. Resulting reports and recommended procedures will be publicized for use by operators.

A 1999 survey by Welling and Associates conducted with 110 energy companies listed flow assurance as the major technical problem in deepwater development around the world. Flow assurance deals with such issues as hydrates, wax, scale, corrosion, and asphaltene deposition. The industry considers hydrates to be the largest problem by an order of magnitude relative to other production concerns. For hydrates in ultradeep water (>2,300 meters), time-dependent avoidance of hydrates by using inhibitors might not be economic. Driven by economics, the flow assurance paradigm currently is shifting from avoidance to risk management, of which the issue of slurry flow in bare, cold steel pipes proposed in this project is critical. Previous research conducted by the project performer has already resulted in some key findings improving the understanding of hydrate blockage formation in pipelines. One conclusion of this work is that the formation of hydrates and their transportability are closely related to the properties of the crude oil-water dispersions and their behavior with and without hydrates. The key to successfully distinguish and classify plugging systems from non-plugging systems is linked to the ability to fully characterize these dispersions. Although there is a tremendous amount of data available in the literature, none really apply to petroleum production and hydrates. Therefore, it is necessary that experimental data be gathered using real production fluids under real production conditions and that a suitable multiphase mechanistic flow model, involving gas, liquid, and solid hydrates be developed. Such a model would be applicable to other systems transporting gas-liquid-solid slurries.

Typical methods to avoid hydrate formation and blockages upon restart of deepwater flowlines include injecting a thermodynamic inhibitor (methanol, glycol), flushing the line with stabilized crude to remove the hydrate formers (gas and water), or injecting anti-agglomerants. In some cases, such as an unexpected shutdown or the occurrence of hurricanes in the Gulf of Mexico, time or process availability may be lacking to properly inhibit the flowline and prevent hydrate formation. It is then of interest to find alternative methods or safe procedures for restart of such uninhibited flow lines.

Work by the research team has confirmed that very limited amounts of hydrates form when the line is shut down, but that hydrate formation may be very fast and lead to quick agglomeration and plugging of the line as a result of restart turbulence. Preliminary experiments suggest that it may be possible to limit hydrate plugging by selecting an appropriate restart rate, which may be fluid-dependent. If proven successful, such a method could be easily deployed in the field at no additional investment to the oil producers and could also avoid costly preparations before shutdown.

Results
For the two year study, 110 flow loop tests were conducted. Ninety-three were in the constant pressure mode, and 13 were in the constant volume mode. The tests were carried out with a variety of crudes: 7 tests were conducted with Troika, 20 with Caratinga, 5 with natural gas, 9 with Buttermilk, 38 with Citgo 4 with Conroe and 2 with Blake. This data set was generated to provide additional parametric data, to quantify the effect of restart with and without additives, and to provide a database to validate the researchers’ slurry flow model. The slurry flow model development was completed, and the model was validated. The restart studies were completed and the risk assessment guidelines for restarts were established.

Phase distribution had a definite effect on the restart behavior of the tests. For the segregated test, hydrate formation was much more significant than for the dispersed case, and a full blockage was formed on the suction leg. For the dispersed case, even though less hydrates were formed, a partial plug was observed. Forty-nine tests have been conducted in a low spot configuration. Low spot experiments indicated that restarting at high velocity would be better for dispersed conditions because of the high plug permeability. However, for the segregated case, restart would be the same at either velocity due to the low plug permeability.

The low spot experiments indicated that plugging occurred in minutes rather than in hours and more likely will require remediation in productions lines. The experiments demonstrated the importance of the water distribution (segregated vs. dispersed) and water cut on the plugging tendency during restarts. The experiments with AA showed that successful restarts could be implemented using laboratory determined dosage as long as the additive is fully dispersed within the water. Injection of AA after shut-in is inefficient because of the difficulty to ensure diffusion of the additive towards the water.Water conversion calculations showed similar trends with water cut as for regular pumping tests and as water cut increases the plugging tendencies of the system also increases.

The first phase of slurry flow model development was completed. The model accounts for possible settling of the particles, as well as viscosification of the liquid due to the presence of the solids. The model has been optimized and model validation with flow loop data has been completed with recent pumping tests. For the settling case the particle diameter is used as tuning parameter; for the viscosification case the adhesive force between the particles is used. Further model enhancements will be carried on considering the effect of hydrate agglomeration on the fluid mixture. The aim will be to predict the slurry flow pressure drop due to hydrate agglomeration and plugging.

Forty two of the test were steady state pumping tests. The focus was on velocity, liquid loading and water cuts since these variables were identified as key variables and also coupled. For this phase, a more realistic model oil (Citgo 19 lube oil – 19 centistokes) was selected to better represent real fluids, unlike dodecane. The use of model fluids remain critical to understand basic phenomena without chemistry effects.

In mid-2007, efforts were initiated to develop an equilibrium model for hydrate formation in the flow loop. This modeling effort became possible after the release of Calsep’s PVTSim open-structure code, allowing us to use PVTSim flash calculation routine to simulate the P-T response of the flow loop during an experiment. Future work is to develop a non-equlibrium model, as well as include steady-state flow simulations using multiple models, one of them being Hernandez’ slurry flow model.

The key findings for the study are as follows:

Benefits
Guidelines related to “safe zones of operation” are needed for operation in deep water and cold environments. This study will develop these guidelines, thereby helping industry to:

Summary
Offshore exploration and production companies are targeting fields in deep and ultradeep waters throughout many areas of the world. This trend requires a robust understanding of flow assurance, especially hydrates, in increasingly demanding conditions. Knowledge of hydrates has advanced to the point where economic risk management will be the future of hydrate flow assurance philosophy. A means to assess the risk in multiple production and restart scenarios is being developed. A dissociation model is being developed for those cases where restart was unsuccessful.

Preliminary work by the project performer through a joint industry project (JIP) suggests that it may be possible to reduce the risk of hydrate plugging by selecting an appropriate restart rate. The optimum restart rate may also depend on the flow line configuration and be fluid-specific. Experiments also seem to indicate that the presence of a free water phase—as opposed to emulsified water—is critical in deciding whether a plug may form or not, but additional research is needed. Studies of low spots showed that blockages can occur in minutes rather than hours. These findings have been useful for many of the member companies that have been trying restarts on their facilities that have been impacted by hurricanes Katrina and Rita.

The project performer is deriving some key relationships among fluid properties, operating conditions, and plugging tendencies of crude oil systems. From these relationships and correlations, tools are being developed to better address the risk of hydrate plugging for a given system, therefore resulting in better planning and implementation of hydrate management strategies. The program is focusing on oil-water dispersion characteristics and their relationship to plugging behavior, as well as slurry flow modeling and dissociation studies for different fluids. Gas-dominated restarts in a low spot in a pipeline are also being conducted. Resulting reports and recommended procedures would be publicized for use by operators to refine their procedures and better manage the risk of hydrate plugging during restart operations. Specific problems related to restart and shutdown, as well as to inhibitor optimization are being addressed. 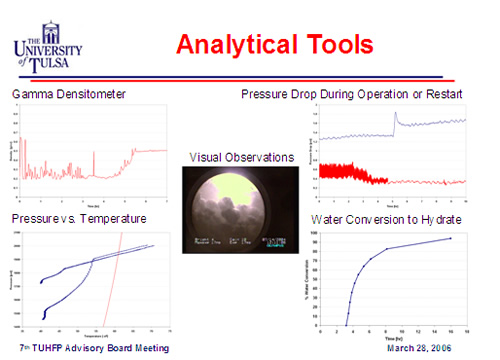