The goal of this project is to develop improved methods for sealing compromised wellbore cement in leaking natural gas and oil wells, thereby reducing the risk of unwanted upward gas migration. Integrated laboratory testing, simulation modeling, and field testing will be conducted to achieve this goal.

Microbially-Induced Calcite Precipitation (MICP) was shown to successfully seal a sandstone fracture in the first attempted downhole deployment of the technology in April 2014. Preliminary laboratory studies indicate that the elevated pH environment produced by cement enhances the MICP process. This project will test MICP for gas/fluid mitigation of compromised cement in an existing well that has regions of poor cement contact as measured via cement bond logs and shows ~300 psi natural gas pressure in the annulus. Pressure response, cement bond logs, sidewall cores, gas flow rate reduction, and parallel laboratory experiments will all be used to evaluate the MICP seal.

Gas migration, also called sustained casing pressure or sustained annular pressure, indicates there is hydraulic communication between the formation and the annulus because of inadequate zonal isolation. The escape of hydrocarbons to the surface or into groundwater aquifers resulting from poor cement placement, aging cement, or damage to the cement is a significant problem and the success rate of squeezing cement to fix leaks is less than 50 percent due to difficulties in getting cement to the proper locations. There is a need for new solutions for sealing leaking wells and, specifically, new methods to fix difficult-to-seal underground leakage pathways such as micro-fractures. MICP could be one solution to these problems. MICP offers a low viscosity solution that could possibly be injected further from the wellbore creating a larger and more permanent seal. The MICP technology could also open up other commercially-attractive applications. Successful demonstration of MICP-based sealing technology to enhance wellbore integrity will provide the following benefits:

MSU has developed a larger wellbore cement analog system (see below) to test the MICP process. The system consists of a 4 inch (10.16 cm) diameter outside casing and a 2.5 inch (6.35 cm) diameter inner PVC delivery pipe. This results in a 0.44 inch (1.18 cm) gap into which well cement can be placed. Initial positive results demonstrated significant permeability reduction and observed calcite precipitation in a wellbore annulus defect of 250 microns. 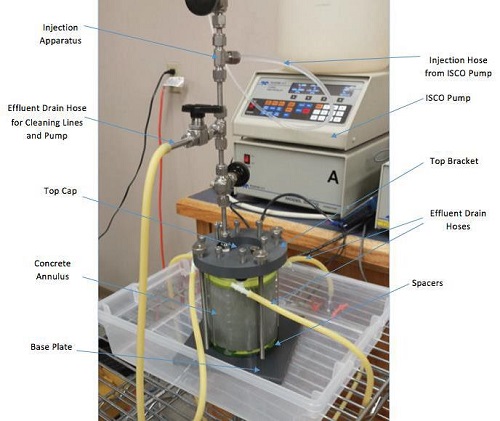 MSU has completed the project including all laboratory studies, simulation modeling, and field data analysis. A manuscript related to dissemination of the results and a Final Technical and Scientific report highlighting project results was received. MSU continues to seek commercial applications for the MICP process.