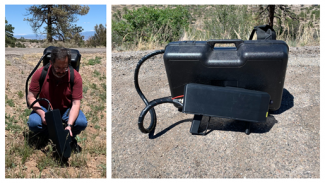 As demand for rare earth elements (REEs) and critical minerals (CMs) increases, research completed with NETL support and oversight has advanced the development of a lightweight tool that can be carried into the field to measure concentrations of these valuable materials in coal wastes and byproducts.

This new technology, which is housed in a backpack and integrated with a handheld sensor, was developed by researchers at Los Alamos National Laboratory (LANL). A recently completed prototype, the culmination of a multiyear, $1 million project funded and administered by NETL, provides an easy-to-use method to determine concentrations of REEs and CMs in coal wastes and byproducts.

Currently, most REEs and CMs are produced and refined offshore and imported to the United States in raw form or, most often, as components already integrated into end-use products. The creation of a reliable, domestic supply of REEs and CMs is needed to ensure U.S. economic, energy and national security.

“REEs are vital in the construction of clean energy components, including generators in wind turbines and electric vehicle motors. They are also needed to manufacture defense systems, medical equipment, modern electronics and a host of other consumer goods,” said NETL’s Brett Hakey, a federal project manager. “This new tool has the potential to be a game-changer in the nation’s efforts to develop a robust onshore supply of these materials to meet growing demand.”

The LANL team leveraged its research in laser-induced breakdown spectroscopy (LIBS) combined with Raman spectroscopy to develop the prototype. The integrated LIBS and Raman system was originally developed in collaboration with NASA for use on Mars and developed into a field portable system calibrated, for this project, specifically to detect REEs. NETL oversight led to applying the technology in a new direction — developing new uses for an old fuel source.

LIBS involves ablating or removing the surface of a sample with a focused laser and generating a plasma. The chemical composition of the sample is determined by analyzing the specific wavelengths of light emitted from atoms and ions in the plasma. Raman spectroscopy involves irradiating a sample with a laser such that the chemical constituents in the sample vibrate at specific frequencies, which allows for the identification of REE-mineralogical composition. Knowing the mineralogy of the REE-containing materials helps to identify the means by which the REEs can be extracted and separated from a potential feedstock material.

This integrated LIBS and Raman instrument enables the assessment of the REE chemistry and mineralogy in a single field instrument without the need for sample preparation, allowing operators to rapidly determine both concentration and composition in mere seconds and saving time and money prospecting for resources that contain high REE concentrations in forms that are easily extractable.

The technology was tested by analyzing the concentration and mineralogy of REEs in a variety of coal-related materials from deposits in New Mexico, including rock and soil found adjacent to coal seams. It is expected that the technology can also be used to analyze the concentration and mineralogy of REEs in other solid coal refuse materials. With further research and modification, the technology could be expanded to identify a wider swath (or all) of critical minerals, not just the REEs.

“Mining communities across the United States have large quantities of coal wastes and byproducts. These materials can contain potentially hazardous constituents and, if not remediated, can contribute to serious environmental problems,” Hakey said. “Working with partners at Los Alamos National Laboratory, NETL has helped to advance a technology that could reduce environmental hazards by using mining byproducts as a feedstock to extract REEs and CMs.”

In addition, developing new uses for coal byproducts — such as using them as source materials for REEs — could drive economic development in coal communities that have suffered through economic downturns. “That’s especially important to ensure no communities are left behind as the nation undergoes a transformational shift to clean energy,” Hakey said.

NETL is a DOE national laboratory that drives innovation and delivers technological solutions for an environmentally sustainable and prosperous energy future. By leveraging its world-class talent and research facilities, NETL is ensuring affordable, abundant and reliable energy that drives a robust economy and national security, while developing technologies to manage carbon across the full life cycle, enabling environmental sustainability for all Americans.