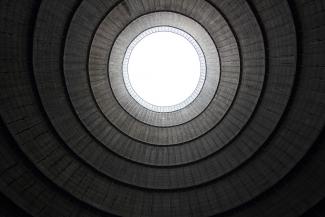 The U.S. Department of Energy’s (DOE) NETL is supporting an award-winning startup company to help develop a novel power plant technology that can produce clean water from cooling tower plumes.

The technology could significantly reduce water consumption in evaporative cooling tower systems by capturing water from cooling tower plumes, which are formed when water vapor generated in cooling towers mixes with colder ambient air as it leaves the tower and condenses.

Both the United Nations and the U.S. State Department have warned that the world is facing a freshwater shortage by 2030. In the U.S. alone, decreasing precipitation and rising populations could pose a serious threat of water shortages.

According to the Massachusetts Institute of Technology (MIT), “About two-fifths of all the water that gets withdrawn from lakes, rivers, and wells in the U.S. is used not for agriculture, drinking or sanitation, but to cool the power plants that provide electricity from fossil fuels or nuclear power.”

More than 65% of these plants use evaporative cooling, leading to huge white plumes that billow from their cooling towers.

With a $1.1 million DOE cooperative agreement support from NETL, the company is set to accelerate the commercialization of the technology from its current lab-scale prototype status to a full-scale prototype on the Fox Energy Center, a large natural gas-fired power plant in Kaukauna, Wisconsin.

“If successful, the technology that is developed could lead to significant water savings and improve water quality with minimal energy cost,” Bakshi said. “Existing towers can be easily retrofitted with the technology, leading to a significant reduction in water usage in cooling towers as well as a reduction in chemical use for water treatment in power plants.”

The technology captures the escaping plumes and treats highly concentrated blowdown-quality water, which is water drained from cooling equipment to remove mineral build-ups. Blowdown water is typically dumped into the wastewater drain.

According to the Infinite Cooling development team, the technology treats that water to produce demineralized water with a low energy cost. It uses electric fields to ionize the plumes coming out of cooling towers, charges the escaping water, and directs the water toward collectors.

The technology was initially developed at MIT and was further developed by Infinite Cooling. The company estimates that its patented technology could eliminate 100% of plumes from cooling towers.

An MIT news release described the technology as “essentially a distillation process, and the pure water it produces could go into power plant boilers — which are separate from the cooling system — that require high-purity water.
That might reduce the need for both fresh water and purification systems for the boilers.

Testing operations resulting from the project will quantify system performance for water production rates and water quality, assess system durability, and lead to next steps for technology maturation and commercialization.

Infinite Cooling’s mission is to mitigate water scarcity around the world by helping power plants and other industrial processes reduce water consumption and water treatment costs by recovering water from cooling tower exhausts. The company has won the MIT Entrepreneurship Prize; MassChallenge, the MIT Clean Energy Prize; the DOE National Cleantech Competition and numerous other awards.

NETL drives innovation and delivers technological solutions for an environmentally sustainable and prosperous energy future. By using its world-class talent and research facilities, NETL is ensuring affordable, abundant and reliable energy that drives a robust economy and national security, while developing technologies to manage carbon across the full life cycle, enabling environmental sustainability for all Americans.