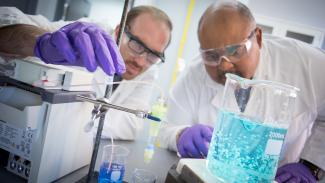 Clean Water for Energy Communities is a MUST for NETL

The Lab’s Multi-functional Sorbent Technology (MUST) comprises a suite of versatile and low-cost, regenerable sorbent materials that look like fine grains of sand, but these tiny materials make a big impact by removing toxic elements such as lead and mercury, among others, from acidic mine drainage (AMD), preventing the effluent streams from polluting fragile ecosystems.

“We’ve already partnered with industry on projects working toward developing systems to treat AMD in the Appalachian region, including one in West Virginia,” said NETL researcher McMahan Gray, who led the team that developed the original material for carbon capture and adapted the technology for water treatment.

The potential applications for MUST go beyond treating AMD. MUST could also be used to remove lead from municipal drinking water and radioactive species from nuclear wastewater. In addition to removing unwanted elements, MUST can also be used to remove beneficial critical minerals such as aluminum, nickel and rare earth elements (REE) from water.

“The impact of these potential new markets is hard to overstate,” Gray said. “REEs are critical not only for manufacturing technologies for national defense but also for many of the green energy technologies we need to decarbonize the economy. We’re importing all of these critical minerals right now, but if MUST is used to also obtain REEs from AMD, companies can spur economic growth in these affected energy communities while remediating the environment and strengthening our nation’s economy.”

NETL’s MUST is one of the many ways the Lab is supporting critical priorities of the Biden Administration and the Interagency Working Group (IWG) on Coal and Power Plant Communities and Economic Revitalization, which is led by NETL Director Brian J. Anderson, Ph.D., and is working to catalyze economic revitalization, create good-paying union jobs and support work in energy communities, especially hard-hit coal, oil and gas, and power plant communities across the country.

MUST was recently announced as a finalist for a prestigious 2021 R&D 100 Award. Winners, as well as the Special Recognition category medalists, will be announced in either late September or mid-October.