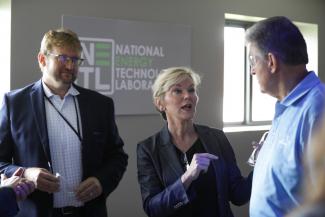 U.S. Secretary of Energy Jennifer M. Granholm spoke to economic development and community leaders at today’s roundtable discussion at NETL in Morgantown, West Virginia, saying that energy communities in the Mountain State and other parts of the country will not be left behind as the nation undergoes a transformation to clean energy technologies.

Secretary Granholm was joined at the Energy Communities and Economy Forum by U.S. Sen. Joe Manchin of West Virginia, who chairs the Senate Energy and Natural Resources Committee, and nearly 50 stakeholders to discuss steps the Biden Administration is taking to support communities hard hit by declines in the use of fossil resources to generate power.

The forum also featured discussion on the initial report completed by the Interagency Working Group (IWG) on Coal and Power Plant Communities and Economic Revitalization, which was created by President Biden to catalyze economic development, create good-paying union jobs and support workers in energy communities as the U.S. moves forward to create a carbon-free power sector by 2035 and a net-zero emissions economy by 2050.

“From the last two days touring West Virginia with my friend, Senator Joe Manchin, I’ve been bowled over by the resolve of this state to seize the energy opportunity ahead and the eagerness to lead the country’s clean energy industries,” Secretary Granholm said. “West Virginia is primed to help build this country’s clean energy future, and once we pass the American Jobs Plan, we’ll roll up our sleeves and get to work.”
NETL Director Brian Anderson, Ph.D., was named in April to serve as Executive Director of the IWG. NETL expertise in energy sector analysis and other resources were used to draft the IWG’s initial report.

“NETL is well-equipped to advance solutions to meet the carbon management goals for our country and develop innovative technologies to create new jobs in communities already impacted by coal mine and power plant closures,” Anderson said.

“We are taking a whole-of-government approach to allocate funding and create jobs as quickly as possible. NETL was honored to welcome our distinguished guests to today’s important event, which will soon be followed by a series of town hall meetings with senior Administration officials in energy communities, to both listen to the concerns of key constituencies and identify federal resources these communities can access,” Anderson said.

During her visit to Morgantown, Secretary Granholm also announced that the Department of Energy has awarded $5 million to the West Virginia University Research Corporation to develop an additive manufacturing-based joining technology that will enable advanced power plants to run with greater efficiency. The project will support DOE’s High Performance Materials program, which fosters improvements in flexibility and reliability for low-carbon fossil power generation and enhances the competitiveness of the nation’s materials supply chain, creating good-paying jobs.

Prior to the forum, Anderson led Secretary Granholm and Sen. Manchin on a tour highlighting NETL’s research in converting carbon dioxide, biomass, components of natural gas, coal wastes and coal byproducts into valuable carbon products. NETL has demonstrated the ability to make roofing materials, roadway materials, computer chips and hydrogen, a clean energy fuel, from these inexpensive and abundant resources.