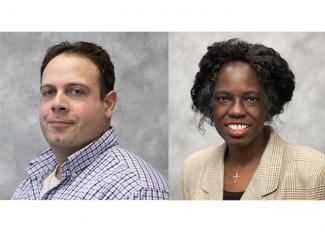 NETL announced that two of its employees were honored with prestigious Excellence in Government Awards by the Pittsburgh Federal Executive Board for significant accomplishments, leadership, outreach and impact on the region and beyond.

Winners of the 2021 Excellence in Government Awards were announced as part of Public Service Recognition Week, which is a nationwide public education campaign held the first full week of May each year to honor the men and women who serve our nation as federal, state, county and local government employees. The awards program recognizes outstanding federal employees for efforts that encourage innovation and excellence in government, reinforce pride in federal service and call public attention to the broad range of services provided by federal employees. The awards were selected by an independent committee of federal executives.

Anthony Burgard received a Gold Award in the Outstanding Contribution to Science category (non-medical) for leading the development of an innovative suite of new science-based computational modeling tools by a diverse team of researchers from across DOE’s laboratory complex. These first of a kind modeling tools are capable of significantly increasing the efficiency and flexibility of power plants, and they were demonstrated under a Cooperative Research and Development Agreement with Tri-State Generation and Transmission Association Inc.’s Escalante Power Plant enabling it to improve its minimum operating load by 44%, significantly reducing fuel cost and carbon dioxide emissions. Additionally, the new computational tools identified an innovative opportunity to improve overall plant efficiency through a new sliding pressure approach to flexible operations while simultaneously balancing equipment degradation resulting from highly dynamic operations. Through Burgard’s technical leadership and scientific advancement, these new computational modeling tools and capabilities can now be applied to other power plants, significantly reducing greenhouse gas emissions and operating costs while improving flexibility and resiliency.

Patricia Rawls received a Bronze Award in the Outstanding Supervisor in a Professional Series category for expertly managing a large group of engineers and scientists with diverse backgrounds and areas of expertise to drive the next generation of energy advancements. Rawls is responsible for implementing a large programmatic research and development portfolio with key departmental stakeholders, which includes NETL research programs in crosscutting, rare earth elements, advanced coal processing, university training, water management, modeling and simulation, and sensors and controls. Due in large part to Rawls’ leadership, direction and guidance, her team met or exceeded all milestones in designating $175 million dollars of U.S. Department of Energy (DOE) funding across more than 50 projects during a particularly difficult fiscal year in 2020. Rawls’ leadership, commitment to the program and her ability to use her employees’ strengths effectively allow her team to successfully produce high-quality advancements in technology.

The Pittsburgh Federal Executive Board (FEB) comprises more than 100 federal agencies and over 20,000 federal employees in our region. The FEB strives to provide effective communications and coordination between federal agencies as well as all levels of government. The goal of our FEB is to be a constructive, unifying force within the federal government, as well as our community, by facilitating valuable collaboration.

Nominations including nearly 1000 nominees were submitted to the Pittsburgh FEB for consideration this year.