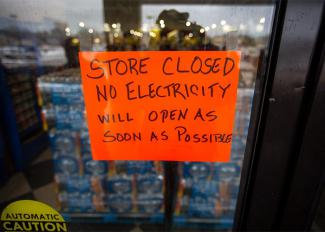 NETL’s Energy Markets Analysis Team (EMAT) conducts analyses to help utilities prepare for changing conditions and recover rapidly from disruptions. The recent near-collapse of the electrical grid in Texas, which occurred during an unusually severe winter storm, validates the importance of EMAT’s work and the value of the recommendations it issues.
The February 2021 storm brought the grid, operated by the Electric Reliability Council of Texas (ERCOT), precariously close to a complete blackout. In a last-minute effort to avert that, ERCOT ordered rolling outages that plunged much of the state into darkness while electricity prices skyrocketed. Assurances that the power infrastructure was prepared to endure harsh winter conditions proved false. Power plants were knocked offline and pumps used to produce the natural gas needed to fuel them froze over.

Released last spring, the EMAT report, “2020 Summer Resource Adequacy in the ERCOT Region,” included analysis of simulation studies of the ERCOT system and findings that noted anticipated reserve margins of the power system were below levels set by ERCOT leadership.

“Although our study reviewed ERCOT’s ability to meet demand during a summer heat wave, we believe the issues we identified played significant roles in the events that occurred last month when Texas was hit with a record winter storm, which reduced its ability to deliver electricity to the more than 25 million people it serves when demand spiked,” said John Brewer, an engineer for EMAT.

According to the U.S. Energy Information Administration (EIA), reserve margin is capacity minus demand, where “capacity” is the expected maximum available supply, and “demand” is expected peak demand less demand response. For instance, a reserve margin of 15% means that an electric system has enough spare capacity to cover system contingencies up to an effective 15% of expected average peak demand.

NETL reported that ERCOT’s anticipated reserve margin was only 10.7% for summer 2020, which was well below the target reserve margin of 13.75% set by the ERCOT Board of Directors.

The report stated ERCOT could make it through the summer season without a loss of load event, if the weather remained normal, even though ERCOT would be well below its minimum reserve margin target. However, if demand reached previous growth-adjusted historical peak levels, ERCOT was likely to find itself operating in emergency conditions during the summer peak, which could include load shedding (reducing electricity consumption by switching off the power supply to groups of customers because the entire system is at risk).

The study also examined the evolution of the ERCOT market across the last decade. In addition, it examined four scenarios and utilized probabilistic dispatch analysis to assess the potential for resource adequacy and reliability concerns under those scenarios. The study found that under three of the four scenarios, the region would see an increased risk for Energy Emergency Alerts (EEAs) and need to institute emergency operator actions to ensure the reliable delivery of electricity. By comparison, the composite conditions seen during the February storm exceeded even the most severe conditions simulated by NETL researchers for summer 2020.

ERCOT operates as an energy-only market, where generators are paid for producing energy but not for keeping reserve capacity on standby to meet future demand peaks. That structure, coupled with delays in new capacity projects coming online and growing demand for electricity, created conditions for higher energy prices and the potential to declare EEAs during the summer.

According to the EIA, Texas is the top U.S. producer of both crude oil and natural gas. Texas also leads the nation in wind-powered generation and produced about 28% of all U.S. wind-powered electricity in 2019. Texas wind turbines have produced more electricity than both of the state’s nuclear power plants since 2014.

The NETL study noted that the energy-only market structure, combined with subsidized renewables and cheap natural gas prices, drive out other forms of generation. The result of this system is often lower wholesale energy prices than other market models that pay for capacity, but greater risks to reliable electrical service.

“The global energy ecosystem must be prepared for and adapt to changing conditions and have the ability to withstand and recover rapidly from disruptions,” Brewer said.

“With this knowledge, we can help guide technology research and development and advise industry in preparing for and adapting to changing conditions, in hopes of preventing disruptions from occurring in the future and minimizing impacts when they do,” Brewer said.