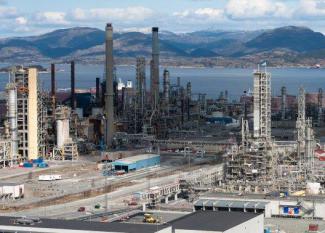 An NETL-supported project to develop a transformational carbon capture technology will culminate in an engineering-scale test campaign at Norway’s Technology Centre Mongstad (TCM), potentially paving the way for future coal-fired power plants to support cost and performance goals for fewer carbon emissions set by the U.S. Department of Energy (DOE).

The Non-Aqueous Solvent (NAS) technology, which is being developed by RTI International researchers with support from DOE’s Office of Fossil Energy (FE) and NETL, could substantially reduce energy consumption in carbon capture operations at coal-fired power plants compared to other solvent-based technologies, such as the monoethanolamine (MEA) process.

“Some of the energy created by power plants will be needed to power their carbon capture systems. Reducing this energy penalty in concert with the capital cost through efficiency improvements and process intensification is the most important factor toward meeting the overall fossil energy performance goals for new coal-fired power plants,” said Andrew Jones, who manages the project for NETL. “The NAS technology that RTI developed has the potential to lower this penalty by up to 40% compared to MEA.”

DOE has set transformational performance goals for new coal-fired power plants with carbon capture at a cost of electricity 30% lower than the baseline cost of electricity from a supercritical pulverized coal plant with carbon capture, or approximately $30 per tonne of CO2 captured by 2030. The RTI project and others like it that are supported by FE are taking significant steps toward this goal.

“The NAS technology was already successfully field tested at the National Carbon Capture Center and SINTEF Tiller Plant in Norway,” Jones said. “Now, the team will begin working to modify the 10 megawatt electrical TCM Amine Plant, which is designed to capture about 200 tonnes of CO2 per day, in preparation for testing and evaluation in 2022.”

Modifications include a CO2 absorber intercooler to reduce the temperature bulge, increase rich loading and reduce amine loss from the absorber. The addition of a forced recirculation pump and piping to the thermosyphon reboiler is also planned to improve heat transfer and reduce process energy demand.

A successful project could demonstrate the technology’s scalability and commercial potential of the NAS carbon capture process for pulverized coal power plants, helping mitigate risk and understand operational efficiency over a wide range of conditions, which will aid in commercial adoption of this technology.