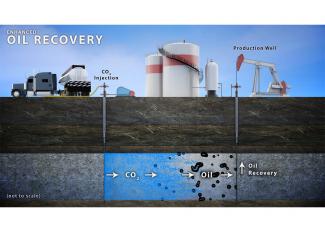 NETL Explores Expanded Use for CO2 to Enhance Oil Recovery

A project utilizing NETL and industry expertise in enhanced oil recovery (EOR) is underway in southern Michigan to unlock access to significant resources in the Trenton/Black River play by injecting carbon dioxide (CO2) with specifically designed chemical additives into the subsurface to improve the flow of oil to production wells.

This month, NETL’s industry partners are drilling an approximately 3,900-foot well in Jackson County, located about 55 miles west of Ann Arbor, to collect data and to be used later as a recovery/production well.

As the project moves forward, a second well will be drilled nearby to collect additional data and to be used as the injection well. CO2, which will be captured from industrial sources and brought on-site, will be injected into the underground oil reservoir to boost production.

Primary recovery is the first stage of hydrocarbon production, in which natural reservoir pressure moves the hydrocarbons from the reservoir, into the wellbore and up to the surface. However, primary recovery in the Trenton/Black River play has yielded only 30-40% of the total oil in place. EOR techniques such as those to be deployed and evaluated in the southern Michigan research project can prolong the life of producing fields for years and even decades.

Injected CO2 is miscible with crude and causes oil molecules to expand, reducing their viscosity and enabling the oil to flow with greater ease through rock formations toward recovery wells. The oil and CO2 mixture that’s produced is then separated and the oil marketed. A portion of the CO2 remains locked in the underground formation while the remainder can be recycled and re-injected into the reservoir to further enhance oil production.

CO2 injection holds even greater promise if it can be more widely applied to mature oil fields, including those found in the Trenton/Black River play.

Oil production in the play began rapidly in the early 1960s, with nearly 1,000 wells drilled, and tapered off by the 1980s after having produced more than 170 million barrels. More recently, 3D seismic study has led to additional discoveries that should produce an additional 20 million barrels. The United States Geological Survey estimates remaining undiscovered resources of 723 million barrels, making the play a significant target for future development.

The goals of the 4½-year NETL-managed project, which has received nearly $8 million in federal funding and more than $2.15 million from industry partners, are to help the United States maintain its growing energy independence and economically use captured CO2 while reducing emissions and maximizing the lifetime utility of existing infrastructure and wells in mature fields.

“The availability and cost of natural CO2 is insufficient to support CO2-EOR in the hundreds of fields with EOR potential in the United States. Without question, there is growing interest among producers to use anthropogenic CO2 sources, which makes our field testing and research in Michigan especially important and valuable,” said Gary Covatch, the project manager and a member of NETL’s Unconventional Oil and Gas Team.

In the past, EOR projects have not been conducted in the Trenton-Black River play of the Southern Michigan Basin due to the reservoir’s complex hydrothermal dolomite reservoir characteristics, including varied and multiple pore types, thief zones (zones encountered during drilling into which circulating fluids can be lost), fractures and  fault systems and other challenges. Research within this project will develop chemical additives to the CO2 to mitigate the challenges of the complex reservoir.

Portable CO2 pressurized storage tanks will be used to store CO2 on-site until it is injected. Chemical additives, foaming agents and tracers will be added to the CO2 stream by precisely metered chemical injections pumps.

Major components controlling reservoir quality and flow in the Trenton-Black River play were studied separately but never integrated into a single framework to capture the complex architecture of the play. To address this deficiency, NETL project partners will use data analytics and machine-learning techniques to integrate all components into a 3D conceptual model and interpretation to assess geohazard risks and predict reservoir characteristics and performance.

In addition, a strategy will be developed to accelerate CO2-EOR adoption in the Trenton-Black River play for commercial application. The strategy will be geared for use by individual operators because production in the region is by small-to-medium, independent producers.

NETL’s partners on the project include the Battelle Memorial Institute, Innova Exploration Inc. and Meridian Production Services, LLC, the operator of the planned new production well to be used in this research project.