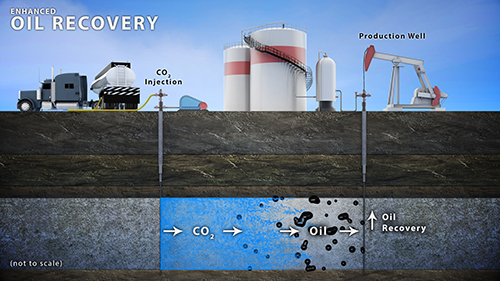 As much as two-thirds of conventional crude oil discovered in U.S. fields remains unproduced, left behind due to the physics of fluid flow. In addition, hydrocarbons in unconventional rocks or that have unconventional characteristics (such as oil in fractured shales, kerogen in oil shale, or bitumen in tar sands) constitute an enormous potential domestic supply of energy. The application of enhanced oil recovery (EOR) technologies to overcome the physical forces holding these hydrocarbons underground can turn these accumulations into oil reserves, enhancing U.S. energy security while helping support economic growth. CO2 injection, already the most common EOR method, holds even greater promise if it can be applied to mature oil fields across the country. The three research focus areas of Enhanced Oil Recovery are CO2 EOR, environmental, and other EOR and oil resources.

Primary and secondary (waterflood) production of conventional light crude oil will recover only about one-third of the oil in place, leaving roughly 400 billion barrels of oil (bbl) in known U.S. reservoirs. This remaining third is the target for EOR. The most common agent used to recover this oil is CO2, and more than 100 CO2 EOR projects are in progress in the United States, most in the Permian Basin of western Texas. NETL is funding research into next generation CO2 EOR technologies that can increase recovery from existing CO2 EOR projects and accelerate application of the process to other mature oil fields around the country. Ideally, these new project will not only add to the nation’s oil supply but also serve as storage locations for captured CO2 from power plants and industrial processes, reducing CO2 emissions.

Ensuring that oil production in mature domestic fields does not harm native ecosystems is a top priority. NETL carries out research to develop technologies that can reduce the environmental risks of onshore oil production and remediate areas that have been impacted by historical production activities.

OTHER EOR AND OIL RESOURCES

Chemical flooding is an effective option for EOR in some reservoirs. NETL research ways to improve the performance and lower the cost of chemical floods, as well as ways to accelerate their application by independent producers, which are the most likely operators of mature U.S. oil fields. NETL also funds research targeting hydrocarbons locked in unconventional reservoir rocks like the Bakken shale or that have characteristics that make their production difficult (such as heavy oil in Arctic reservoirs or bitumen in tar sands).