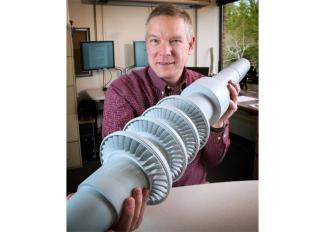 Key recommendations to guide the operation of a first-of-its-kind testing facility to develop next-generation power plants have been issued by NETL researchers. If successful, testing at this facility will provide a pathway to lower the cost of electricity, shrink the environmental and physical footprint of power generation systems and conserve water.

Supported with funding by the U.S. Department of Energy (DOE) and industry partners, the STEP plant, a 10-megawatt pilot scale facility, is designed to test the use of supercritical carbon dioxide (sCO2) as the working fluid for advanced power generation stations.

Current power plants use water as the working fluid to produce high-pressure steam that drives turbines. The use of sCO2 offers a higher-efficiency alternative and multiple benefits, including a reduction in water consumption, to produce electricity.

The ability of sCO2 to serve as superior working fluid is found in the fact that when it’s held above a critical temperature and pressure (88 degrees Fahrenheit and 1070 psi), sCO2 acts like a gas while having the density of a liquid. Such enhancements mean sCO2 turbomachinery can be one-tenth the size of conventional power plant components. Also, a single desk-sized sCO2 turbine could potentially power 10,000 homes, creating a new generation of power plants that will use less fuel, produce fewer greenhouse gas emissions and require less space.

The study demonstrated effective simulations for ramping up and ramping down in response to changes in electricity demand, operational methods to prevent damage to compressors, heat exchangers and other equipment, and strategies to initiate shutdowns and restarts within expected process constraints and while reducing risk to plant operations.

The dynamic process modeling work is an important contributor to risk reduction during commissioning and startup operations of the STEP facility, with the research findings directly transferable to large-scale systems and associated analyses. It is also more broadly applicable to controls and operations for sCO2 cycle applications using concentrated solar and nuclear energy sources.

In general, studies have shown the use of sCO2 as the working fluid increases energy output regardless of the thermal fuel source. Where fuel costs are a significant portion of overall costs of power generation (for example, coal- and natural gas-fired plants), the benefit is reduced fuel use and the associated costs. Where capital investments are high (for instance, nuclear and concentrating solar power), the benefit is increased power output for the initial investment, thereby reducing the cost of electricity.

NETL’s recent findings will be presented to STEP project partners to help prepare for plant commissioning next summer. The Gas Technology Institute is the prime recipient of the cooperative agreement to build the plant while the Southwest Research Institute and General Electric Global Research are sub-recipients.

The STEP plant will be capable of being reconfigured to accommodate potential future testing of system/cycle upgrades, new cycle configurations, and new or upgraded components in addition to next-generation turbomachinery and heat exchanger technology. Other STEP objectives include refining the sCO2 power cycle, demonstrating component performance and scalability, designing the facility to accommodate multiple new supporting technologies and reducing barriers to technology commercialization.