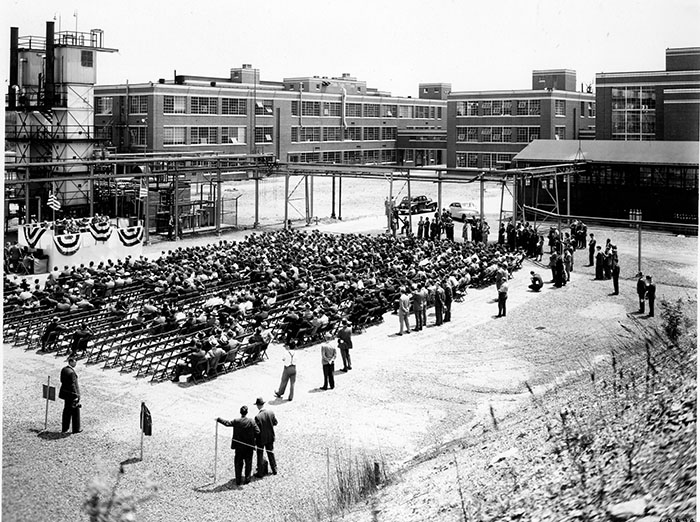 In the 18th century, entrepreneurs began to chisel exposed chunks of coal to be burned for heat from the cliffs of Mount Washington, shuttle it by canoe across the Monongahela River, and deliver it for a fee to the troops that manned Ft. Pitt. Since then, the business of providing safe, efficient, and affordable energy to power the city of Pittsburgh’s upward economic trajectory has been an engine for progress..

In 1910, the federal energy research facility, now known as the U.S. Department of Energy’s National Energy Technology Laboratory (NETL), opened the Pittsburgh Experiment Station in Bruceton, Pennsylvania, 12 miles south of Pittsburgh. This facility became a sparkplug of innovation, supporting the city in its industrial and economic evolution with new ideas for safety, efficiency, and productivity that often went above and beyond its energy-related missions. Now, as Pittsburgh celebrates its bicentennial and prepares for a third century as a great American city, NETL is proud to celebrate its role in Pittsburgh’s success—a role that stands as a testimony to teamwork, persistence, knowledge, and ingenuity.

Mine Safety and a Forbes Field Extravaganza

The first iteration of what would become today’s NETL was housed in the U.S. Army’s old Explosives Experiment Station at the Pittsburgh Arsenal on Butler Street in the Lawrenceville neighborhood of Pittsburgh. Researchers, then under the banner of the federal Bureau of Mines, began investigating electricity, its applications in mining, safer use of explosives, and improved equipment and procedures for mine rescue work. The activity was in response to the increasing death toll in America’s coal mines that accompanied the increase in demand for coal needed by expanding steel mills in the Pittsburgh region.

The work had an effective “safety first” focus and by October 1911, the Pittsburgh Pirates lent the use of Forbes Field in Oakland for the first national mine safety demonstration. President William Howard Taft was in attendance to review cutting-edge equipment, supplies, and apparatus and to witness demonstrations like the ignition of coal dust in a mammoth cylinder that produced tongues of flame and a blast that rattled the windows of the Oakland neighborhood in every direction. Pullman railroad cars modified as experimental mine rescue stations were also on display.

At Pittsburgh’s Forbes Field that day, miners received first aid and resuscitation training for the first time and learned to use mine breathing devices—innovations based on local research results. It was the beginning of national and international mine rescue competitions that continue into the 21st Century.

Meanwhile, additional facilities including an experimental mine and laboratories were created in a more remote location at Bruceton, near South Park, where underground explosions could be duplicated and studied, leading to safer mining procedures and a more thorough understanding of the causes of explosions.

Those early Pittsburgh-based Bureau of Mines researchers also began a long tradition of addressing the challenge of conserving national resources while continuing to access energy fuels in the ground that were needed to power the plants, homes, automobiles, ships, and trains of a growing nation.

By 1919, new research facilities were created on a tract of land near the Carnegie Institute of Technology in Oakland, fronting on Forbes Avenue. The Journal of Industrial and Engineering Chemistry described the new Pittsburgh facilities as “a symbol of the function of the Bureau to unlock the secrets of nature for the benefit of all mankind.”

The capabilities and expertise of the researchers continued to grow. In the 1920s and 1930s, the focus on making everyday use of coal, petroleum, and natural gas safer forged an ability to investigate and prevent explosions. When unusual explosions occurred on city streets as well as coal mines, experts from the Pittsburgh Experiment Station of the Bureau of Mines were called in as crime scene experts to get answers. Their work helped protect public health and safety. Experts used their skills to help solve engineering problems that affected millions of Americans and helped the region continue its upward industrial climb.

Samples for these tests were taken at a location just north of the Bureau of Mines’ coal-fired power plant. Proximity to the power plant, as well as the presence of nearby industrial and residential districts, resulted in the area usually being smoky with gaseous and combustion emissions. The experiment showed a positive correlation between the amount of fog/smoke and the concentration of sulphur dioxide, helping researchers pinpoint a cause of the air pollution.

In Pittsburgh, federal researchers launched new investigations and discovered ways to detect odorless gases, effectively and safely vent new automobile tunnels, and evaluate the safety of leaded gasoline. Specifically, the researchers scored a major innovation success when they devised an effective ventilation system for Pittsburgh’s brand new Liberty Tunnel—a project necessitated when, on May 10, 1924, traffic congestion in the new tunnel panicked motorists who abandoned their cars and fled the “tubes.” The Pittsburgh-based researchers quickly set up portable monitors they developed at their Oakland site and helped develop ventilation changes that made the vital transportation link safe for early drivers. 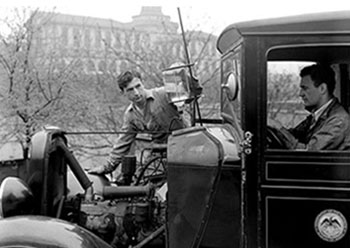 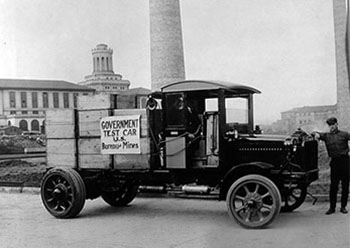 Like most of America, the people and industries of Pittsburgh rolled up their sleeves and threw everything they had into improving the ability of U.S. forces to fight the enemy. NETL’s research predecessors were partners in those efforts as they applied their growing expertise in explosives to a range of assignments that put Pittsburgh on the forefront of the war effort. Researchers went to work in the experimental mine and laboratories to improve the safety of explosives handling and storage. They appraised captured German and Japanese weaponry; analyzed how sensitive various explosives were to friction, impact, heat, and electricity; and analyzed the shock waves that explosions produced.

Experts at the Pittsburgh research site in South Park Township even tested rocket propellants and the M1 bazooka that GIs eventually used on European battlefields against German tanks. While scientists elsewhere were involved with the Manhattan Project to create a nuclear weapon, the experts in Pittsburgh participated in the design of a trigger for the chain reaction that would cause a fission-type atomic bomb to explode.

Responding to a key national priority to ensure the energy security of the nation during the war, the Pittsburgh Experiment Station surveyed all coal, oil, natural gas, and mineral resources available for the war effort and recommended conservation, improved production methods, and recycling steps to extend their impact. At the same time, efforts continued to improve safety in America’s mines.

Reflecting its tradition of responding to the nation’s most urgent needs, the work of the Pittsburgh-based energy researchers veered into areas beyond coal and energy in the decades following the conclusion of WW II. Investigations into ignition, detonation, and combustion fed practical innovations from safer fuel tanks and stove burners to the design of spacecraft. As Americans turned their attention to the space race in the 1950s, Bureau of Mines personnel at the Explosive Research Centers kept Pittsburgh at the forefront of innovation, conducting leading research on solid rocket propellants, safe handling of liquid-hydrogen fuel, the behavior of explosives in conditions resembling the lunar atmosphere, and shielding to protect space vehicles against meteor impacts.

By the mid-1970s, international situations and economics again pushed energy issues to the forefront. Pittsburgh responded. A major thrust of research work began that, by the first decade of the 21st Century, would have a major impact on the energy fortunes of western Pennsylvania. Work began on directionally deviated well-drilling techniques to enhance petroleum and natural gas recovery followed by a concentrated research project on a technique that became known as massive hydraulic fracturing. That work had much to do with the Marcellus Shale drilling work that dots Western Pennsylvania and led to the nation’s resurgence as an energy producer.

By 1977, the Department of Energy (DOE) was formed. The Pittsburgh research facilities became known as the Pittsburgh Energy Technology Center (PETC) and were no longer part of the Bureau of Mines. PETC pioneered work on environmental issues and energy innovations, providing workable technologies to address acid rain. 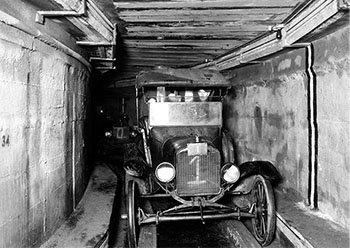 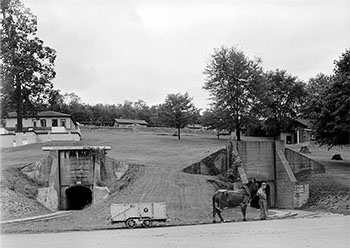 Evolutionary Change and an Ongoing Commitment to Outreach

Today, the Pittsburgh facilities, along with DOE laboratories in Morgantown, West Virginia and Albany, Oregon are combined and known as a DOE National Laboratory called the National Energy Technology Laboratory (NETL). The chemistry laboratories, demonstration coal mines, and explosive experimentation facilities of the past 100 years have been augmented with supercomputers, lasers, data systems, sensors, and sophisticated information sharing processes that accelerate the mission of fossil energy research for the nation and promote positive results. Partnerships with local companies and powerhouse academic research institutions like Carnegie Mellon University and the University of Pittsburgh advanced cutting-edge technologies that are bringing advances in the clean and efficient use of fossil energy fuels.

NETL has never lost touch with its responsibility of interacting with Pittsburghers on a personal level. NETL is an active partner with the educators of Pittsburgh, reaching out to conduct onsite school visits, host tours, and conduct programs that actively encourage young people of the region to pursue education and careers in science, technology, engineering, and mathematics. Its Science Bowl activities have engaged thousands of students over the years in competitive activities designed to inspire the next generation of Pittsburghers to become a part of the region’s continuing scientific renaissance.

Based on its successes in reducing mercury emissions at power plants and addressing acid raid, NETL began its second century of service by focusing on the challenges of global climate change. The nearly 700 Pittsburgh-based employees of NETL are part of an energy research powerhouse for the region, tackling thousands of projects and activities that focus nationwide attention on their results from carbon capture and storage and development of advanced energy systems to methane monitoring and continued hydraulic fracturing research using captured CO2 and dozens of other innovation-rich projects.

Just as it has for more than half of the life of the city, the NETL of the twenty-first century will remain a solid partner in progress as Pittsburgh begins its third century. Spinning out new ideas and new technologies that create new companies and new jobs will remain a top priority as the men and women of NETL innovate a brighter future for the region and the nation.