The Integrated Gasification Combined Cycle (IGCC) application of gasification offers some water-saving advantages over other technologies for producing electricity from coal. Regions with limited water resources, typical of many parts of the western United States, could conserve resources by meeting increasing electricity demand with IGCC generation. Many of these areas have good coal resources and a need for new generating capacity. 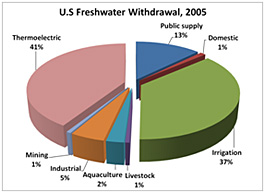 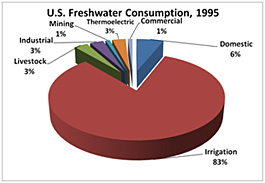 With increasing energy demand, water consumption resulting from energy industry activities will only continue to grow. The Energy Information Administration (EIA) projects that total electric consumption will increase from 4,152 billion kilowatt-hours in 2010 to 5,004 billion kilowatt-hours in 2035. Coal fired power generation is expected to increase by 11 GW from 2010 to 2035 (see gasification markets).2  The result will be more pressure on the nation’s water resources.

Water Use in Thermoelectric Power Plants
The main demand for water within a thermoelectric power plant is for condensing steam. Thermoelectric power generation typically converts the energy in a fuel source (fossil, nuclear, or biomass) to steam and then uses the steam to drive a turbine-generator. After the steam is exhausted from the turbine it is condensed and recycled for use in the production of steam again. Since the condensate must be cooled as much as possible to reduce backpressure on the turbine, this recycling of the steam is a critical process in the efficiency of the plant.

Once-through systems draw cooling water from a lake, river, or ocean to condense the steam exhausted from the turbine and then discharge the water back to the same body of water. This type of plant then has a relatively high water withdrawal, but not much of the water is actually consumed.

The wet recirculating cooling systems consist of two main technologies: wet cooling towers, and cooling ponds. The more common type, the cooling tower, dissipates heat by circulating the heated water through the tower where some of the water evaporates as most of it is cooled. In the cooling pond system natural conduction and convection transfer heat from the water discharged into the pond to the atmosphere. In both cases water withdrawal is relatively low, but due to the evaporation of water to the atmosphere and the need to remove blowdown from the system, water consumption is relatively high.

In dry cooling systems the steam exhausted from the turbine is cooled by forcing ambient air across a heat exchanger filled with the condensing steam. There is no loss of water to evaporation or blowdown in this configuration and therefore both water withdrawal and consumption are minimal; however use of this type of system is limited. Since air is not nearly as efficient for heat transfer as is water, the increased electrical cost makes dry cooling less economical.

Within the United States, each of these types of systems are used with 2010 estimates indicating that 42.7% of power plants use once-through, 41.9% use wet recirculating, 14.5% cooling ponds, and 0.9% dry cooling systems.3

Pulverized Coal vs. IGCC
In a pulverized coal (PC) combustion power plant, the coal is burned to produce steam via a pulverized coil boiler. The steam is then used to create electricity with a steam turbine connected to a generator. The steam exhausted from the turbine is then cooled in the condenser with cooling water usually supplied by a cooling tower which loses water through evaporation and blowdown. Most of the water consumption within the plant is for this purpose.

In addition, water is used in the PC plant configurations for emission control. Flue gas desulfurization (FGD) systems use water combined with limestone or other agents to create a slurry which is used in the treatment of the flue gas to remove sulfur and lower SO2 emissions to the required levels. Also, plant operators commonly add or leave 20–30% water in solid wastes generated, the bulk of which is fly ash, for dust control and optimum bulk density of those materials. If this water is part of the plant water effluents it may contain dissolved salts and minerals. Some plants practicing zero water discharge may add a small amount of solid salts and minerals (from water effluent evaporation) to these solid residues.

In an IGCC setting, water consumption is dramatically reduced compared with PC plants due to the reduced reliance on steam on a consistent electrical output basis. Since the syngas produced by the gasification process is combusted in a gas turbine, steam is not used as the primary means of transferring the energy from the coal to rotational energy. Steam is only used to recover the heat from the gas turbine exhaust in a heat recovery steam generator (HRSG). This reduces the steam system size required on an IGCC plant significantly, compared to a PC plant of similar electrical output.

This reduction can be offset by the fact that an IGCC plant uses water in process areas, including providing steam to the gasifier, in acid gas removal, carbonyl sulfate hydrolysis, particulate and mercury removal, humidification of syngas prior to the gas turbine, and in the water-gas shift reaction. Some gasifiers also use water for ash and slag handling processes. 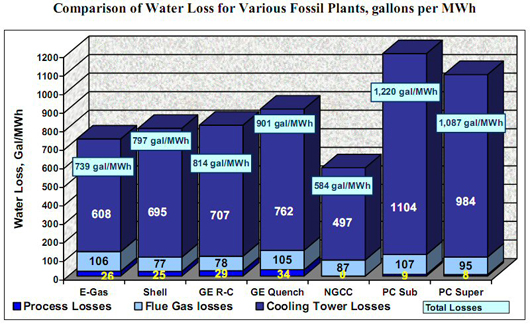 Water Use in a Carbon Capture Scenario
If future limitations on carbon emissions require generating plants with the ability to separate and capture carbon emissions, increased water usage will be required for all electrical generating technologies. However, since the IGCC process adapts more easily to CO2 removal, the increase in water use for carbon capture is marginal compared to plants of other types. In fact, in a carbon capture scenario, IGCC plants are nearly as conservative in water consumption as natural gas combined cycle (NGCC) plants. The chart below shows estimated water usage figures for the power plant technologies in both carbon capture and non-capture scenarios. 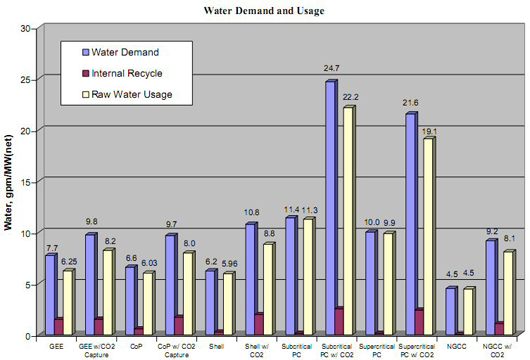 So, in summary it can be said that gasification-based power offers efficiency benefits in the use of water. Raw water use in IGCC plants is lower than in pulverized coal plants. Without CCS, PC plants have a much higher steam turbine output, requiring more cooling water and condenser duties (typical raw water use ratio of 1.7:1.0). With carbon capture, the difference in water use is even more dramatic (2.5:1.0), as the chemical absorption process for CO2 capture in PC plants (amine) requires even more cooling water. In terms of raw water increase, CO2 capture increases raw water use by 37% for IGCC plants, versus a 95% increase for PC plants.