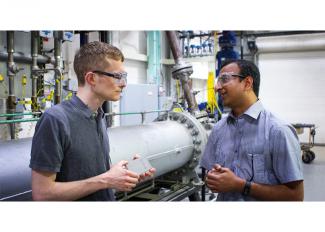 NETL researchers envision a future in which hospitals, universities and other institutions will use on-site combined heat and power (CHP) systems to produce their own electricity, as well as the energy to heat and cool their buildings, while burning less fuel and releasing fewer emissions into the atmosphere.

The goal of the Advanced Turbine Airfoils for Efficient Combined Heat and Power Systems project is to evaluate how new airfoil cooling designs, new materials and additive manufacturing technologies can raise the efficiency of turbines used in CHP systems.

Sponsored by the U.S. Department of Energy’s Office of Energy Efficiency and Renewable Energy (EERE), much of the work completed to date in the three-year initiative has focused on developing new airfoil cooling designs to improve the durability of these critical components and increase turbine firing temperature to 2,380 degrees Fahrenheit.

Turbines combust a mixture of air and fuel. The high-temperature and high-pressure gas is expanded through a series of nozzles and blade-like airfoils, causing the turbine shaft to spin. The spinning shaft, in turn, drives a generator that produces electricity.

CHP is a cogeneration technology that generates electricity and captures heat that would otherwise be wasted to provide useful thermal energy that can be used for heating, cooling and domestic hot water. According to EERE, facilities requiring 1-20 megawatts of electricity produced by more efficient small gas turbines represent a significant potential CHP market.

Development of a highly reliable CHP system could lower utility costs and bring a host of other benefits (economic and environmental) to institutions such as universities and hospitals.

According to the U.S. Environmental Protection Agency, CHP is a superior energy resource for hospitals, where losing electricity can disrupt critical life support systems, because it can provide all energy services efficiently during grid outages. In addition to providing reliable energy and making hospitals more efficient, CHP can help hospitals reduce costs and meet their sustainability and emissions reduction goals. Hospitals with CHP systems also would avoid transmission and distribution losses that occur under normal operations, where electricity travels over power lines.

The current state-of-the-art turbine airfoils direct cooling air to the sections of the blade susceptible to deterioration and damage. However, designs that direct too much of the available air to cool the airfoil reduce turbine efficiency by limiting the amount of air that can combust with fuel.

“It is a delicate balance,” said Matthew Searle, Ph.D., a postdoctoral researcher in the Oak Ridge Institute for Science and Education (ORISE) program in Morgantown, who is developing an airfoil design that creates air flow patterns in internal flow passages to effectively cool the blade and minimize required coolant. 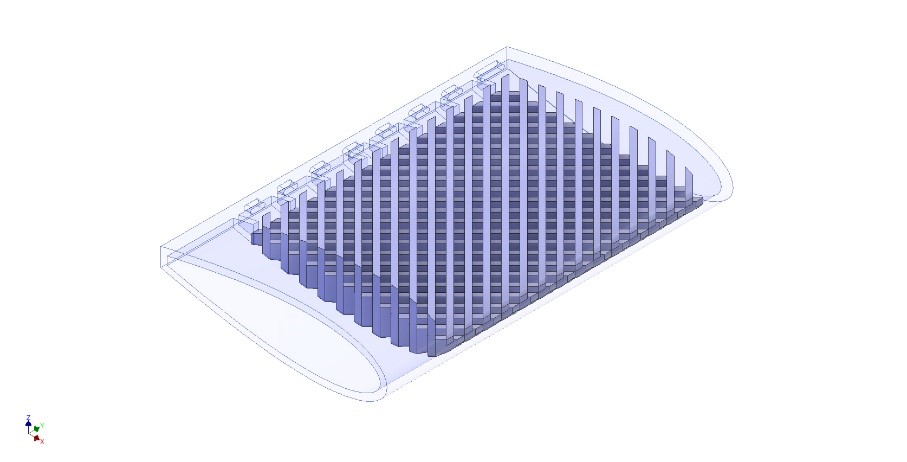 The lattice design allows air to enter at the hub of the airfoil (lower left in diagram on right) and flow diagonally in the passages between the fins. When the flow reaches the end of a passage, it impinges on the wall and turns to flow through the diagonal passage on the opposite side of the blade.

As part of the same NETL project, Searle’s colleague, Sridharan Ramesh, Ph.D., is working on a micro-channel airfoil design. In his design, cooling air flows through micro-sized channels 0.02 to 0.05 inches in diameter. The micro-channel airfoil (diagram on left) is designed to take the cooling air as close as possible to the airfoil’s outer surface, where failures are most likely to occur due to extreme temperature.

Complex designs are difficult to produce with tradition casting methods. “Therefore, we plan to use metal additive manufacturing (3D printing) to build the airfoil one layer at a time with a high degree of accuracy,” Ramesh said.

As part of the EERE project, airfoils to be designed need to demonstrate they can increase turbine firing temperatures by 180 degrees Fahrenheit. Ramesh, a former ORISE postdoctoral researcher at NETL, explained that in order to achieve that goal, prototypes of the micro-channel airfoil will be made out of stainless steel, as well as Inconel, a nickel-chromium alloy classified as a superalloy because of its high-performance qualities and resistance to corrosion and oxidation.

Project work to be completed this year calls for identifying the most promising cooling configurations and additive manufacturing materials. In 2021, the team will test samples of those materials and their preliminary airfoil designs. The schedule for 2022 will focus on manufacturing a demonstration airfoil and completion of performance testing.

Straub serves as NETL’s principal investigator on the project and as Searle’s ORISE mentor. Straub credits Searle and Ramesh for embracing the importance of collaboration, which has successfully moved the project forward. “As young, talented engineers, they are both subject matter experts in their areas, but they also value the importance of collaboration with other engineers, technicians and staff across other disciplines at NETL,” Straub said.

Searle pointed out that Ramesh’s expertise in numerical simulation has been helpful in developing the lattice airfoil design, while Searle has been able to contribute insights about heat transfer dynamics to support Ramesh’s work.

“It’s really important to know that I can collaborate with others to bring all the pieces of the puzzle together. I think that’s part of the culture here at NETL,” Searle said.