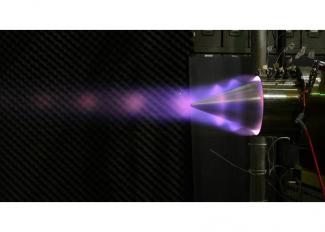 By partnering with a host of federal agencies including NASA, NETL’s rotating detonation engine (RDE) technology development can proceed with greater effectiveness and efficiency, potentially speeding up real-world applications of the engines.

Internal combustion engines, such as gas turbines, are effective, but they suffer limitations in pressure and power output. RDEs, on the other hand, create controlled, continuous detonation waves that rotate inside a modified gas turbine combustion chamber. This means RDEs avoid the pressure loss and resulting decrease in efficiency that occurs with conventional gas turbine engines. The rotating detonation process means more of the fuel’s energy is captured and utilized, resulting in higher power output, less fuel being consumed, a smaller industrial footprint and reduced environmental impact.

One of the greatest advantages of the RDE concept is its applicability for both land-based power generation as well as propulsion in everything from ships to aircraft, and spacecraft. NETL’s RDE research has focused on using these engines for power generation, and the technology is gaining interest from additional federal agencies for a wide range of potential applications.

“Although the Navy has looked at RDE in the past for onboard-ship power generation, they’re now focused on propulsion,” explained Don Ferguson, a researcher with NETL’s Thermal Sciences Team. “All these agencies are looking at air-breathing propulsion as well as rocket propulsion, so they’re looking at different applications for the same technology.”

The Council will facilitate information exchange, investment coordination, and strategic collaboration.  Although the individual agencies involved may have specific needs for their future RDE application, there are numerous opportunities to collaborate on fundamental objectives that would lead to significant advancements in applied technologies while ensuring taxpayer funds are used in the most effective way possible.

“The intent of this Council is to coordinate research activities among the agencies as best we can with the intent of avoiding duplication of efforts wherever possible,” said Ferguson, who also serves as DOE’s representative on the National Rotating Detonation Engine Council.

“It’s our responsibility to be good stewards of taxpayer dollars as they are applied to research. If one agency has some research objective in their funding, say for Company X to do research, we’ll have access to that information through the Council that wouldn’t be readily available otherwise. That might be useful for our own projects. When we have a funding announcement, we’d make it available to all the other agencies for awareness.”

Ferguson said the agencies within the Council are lending their expertise to one another for program and proposal reviews to streamline all aspects of the administration work that supports research projects and keeps them funded. This is one way a united effort can lower costs and save time instead of each induvial agency pursuing similar goals.

As for research efforts and near future objectives, all Council agencies are interested in low-loss air and fuel injectors. The hope is that sharing information across agencies and projects will accelerate their development. NETL is already participating in a computational fluid dynamics round-robin modeling activity with the Air Force Research Laboratory and several university research programs.

By combining their efforts, the National Rotating Detonation Engine Council hopes to accelerate the development and deployment of RDE technologies at faster and more efficient rate than its member agencies working completely on their own.

As increasing thermodynamic efficiency of internal combustion gets more difficult, unconventional pathways to higher efficiency are being explored, Ferguson said.  The limitations of internal combustion combined with better diagnostic tools such as high-speed imagery, high speed transducers, inexpensive data storage and better modeling capabilities, are all attributes that make RDEs attractive for many applications.

NETL is already working on some of these advancements to make RDEs more feasible.

“Recently, we’ve focused on developing machine learning/vision diagnostics to better understand the operational characteristics of the RDE,” Ferguson explained. “We have developed a trained neural network that can rapidly determine the detonation wave operating mode from a single picture as opposed to requiring hundreds or thousands of images. We are working to combine this with high-speed transducer to develop a real-time wave mode and speed diagnostic, which is not currently available.”

In another research area, NETL delved into RDE technology with a unique experimental rig that is water-cooled and can run for long periods of time while most experimental RDEs can only run for a few seconds. With this rig, NETL can explore issues associated with operating the RDE under thermally stable conditions and consider the impact of transient operations on detonation wave stability.

DOE also has a unique application requiring the integration of an RDE with a gas turbine compressor and turbine. Ferguson said this application requires researchers to explore unique operating spaces such as high pressure and natural gas/hydrogen combustion, something with which their unique water-cooled rig can assist.

In addition, NETL has worked with Purdue University to optimize the design for integrating the RDE with a turbine and have been working with the University of Central Florida to perform real-time measurement of nitrogen oxide emissions.

With its state-of-the-art facilities, world class scientists, extended partnerships, and research experience, Ferguson said NETL is positioned to be a very productive and valuable member of the National Rotating Detonation Engine Council.