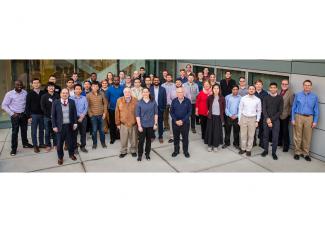 As NETL strives to address some of the world’s greatest challenges to deliver reliable and affordable energy supplies, it uses tools such as the IDAES Integrated Platform and relies on the talent and expertise of its world-class researchers.

NETL’s Institute for the Design of Advanced Energy Systems (IDAES) seeks to be the premier resource for the identification, synthesis, optimization, and analysis of innovative advanced energy systems at scales ranging from materials to process to system to market. The IDAES Integrated Platform supports the design and optimization of innovative new processes that go beyond current equipment and process constraints.

Hailing from across the world­­—the United States, Australia, Mexico, Nigeria, and India­­— many of these researchers joined NETL through the Oak Ridge Institute for Science and Education (ORISE) postdoctoral programs, motivated by the Lab’s important goals and the avenues by which they can be accomplished ranging from advanced materials to computational tools.

Burgard, who currently manages the Process Systems Engineering Research team, joined NETL in 2016 and earned his Ph.D. in chemical engineering from Penn State University. He serves as a principal investigator for the IDAES Integrated Platform. His research focuses on developing the process equipment models, flowsheets, and solution methodologies required for simulating and optimizing fossil-based power plants during both steady-state and dynamic operation. Burgard’s 12 years of experience at biotech company Genomatica Inc. provided many valuable lessons he took to heart working at NETL.

“The largest challenge for me, given my previous background in biotech, was to learn enough about the issues facing the energy industry to contribute in a meaningful way,” he said. “Working side-by-side with arguably the best optimization researchers in the world at NETL and the partner labs is the best part of the job; that and working closely with so many talented young, enthusiastic engineers right at the start of their careers.”

Educated at Kansas State University and the University of Kansas, Eslick joined NETL in 2010. He led the IDAES Advanced Solvent Systems Optimization, which developed the models and computational tools necessary for full simulations of advanced solvent systems. Eslick also serves as the lead of the Modeling and Optimization of Existing Plants subtask, which applies and enhances the power plant models.

“When somebody else takes something I worked on and uses it to accomplish something really impressive, it’s very gratifying,” Eslick said. “It feels good to do something useful. It’s good to be open to suggestions, and realize you are not always right. My teammates always have a lot of good ideas and constructive criticism. I think that makes our products much better.”

Lee received his education from undergraduate to Ph.D. in chemical engineering from Australia’s James Cook University. For the IDAES Integrated Platform, Lee was as part of the core development team working on the underlying modeling framework. His contributions focused on tools for helping people develop new models. Drawing on his experiences as a modeler and remembering all the things that he wished were easier to do, Lee kept an eye to making the program user-friendly. He also made significant contributions to the libraries of ready-made models for users to take and use.

“The most gratifying part of my job is to know that I am not only solving challenging intellectual problems, but that my work is also be applied to address current challenges,” Lee said. “The most useful skill I’ve learned whilst working at NETL is to understand how to communicate information to different audiences. As part of our work at NETL, we need to communicate to a wide range of different people; engineers, managers, politicians and the general public to name a few.”

He noted that his father and grandfather continue to inspire him, as they taught him how to look at everything in a critical manner and laid the foundation for who he became as a person.

“NETL’s mission to find cleaner and more efficient technologies for power generation is critical to the world’s energy future,” Zamarripa said. “Realizing that our contributions — mathematical models, methods, tools — will go beyond one single user or plant, we are developing the next generation process modeling framework that will be used by several decision-makers such as process engineers, plant managers, policy makers, students and professors.”

Zamarripa earned chemical engineering degrees at Technical Institute of la Laguna in Torreon, Mexico, and Autonomous University of Nuevo Leon in Monterrey, Mexico, before earning his Ph.D. at Spain’s Polytechnical University of Barcelona. Inspired by friends, family, professors and his mentors, Zamarripa said they taught him his passion for research.

He performed several tasks during the development of IDAES. He provided, among other things, expertise in chemical engineering, process systems engineering, feedback from the user perspective, and actively performed code review and tested the tools developed by other researchers.

“I work with some of the smartest and most accomplished researchers in the process systems engineering field on developing a cutting edge, next generational, process systems engineering software,” Okoli said. “As we develop this software, we are also continually applying it to solve some of the biggest challenges currently facing the fossil energy industry including to help develop new technology, and to make existing technology cleaner and more efficient. This has been a gratifying experience.”

Okoli was educated in chemical engineering at the University of Port-Harcourt in Nigeria and the University of Manchester in the United Kingdom before earning a Ph.D. in chemical engineering from Canada’s McMaster University. Joining NETL in 2017, he contributed to the development of the IDAES gas-solid contactor models, which are integral unit-operations for some very promising advanced energy technologies such as chemical looping combustion and downstream adsorption-based carbon dioxide capture.

Okoli takes inspiration from his uncle, Professor John Umunna Okoli, a professor emeritus of mechanical engineering at the University of Port-Harcourt in Nigeria.

“He taught me the value of continuous learning and of holding oneself to the highest standards every day,” Okoli said.

Obtaining his bachelor’s degree from Anna University Chennai, Ghouse earned his masters and Ph.D. in chemical engineering from McMaster University. He is inspired by his late father who was also a chemical engineer and continues to inspire him to be a better person both professionally and personally. Working on IDAES, Ghouse worked primarily with the design and development of its core architecture and various components of the platform.

“I was also responsible for the learning and outreach efforts, which involved documentation, developing examples that demonstrate IDAES capabilities for end users and delivering public workshops,” he said.

The researchers’ combined experiences, both from their careers in general and IDAES specifically, have shown them the value of bringing together talent from multiple disciplines and working together as a team.

“Collaborating with researchers and managing activities spread across different national labs and academic institutions is one of the most powerful lessons I picked up along the way,” Ghouse said, emphasizing the importance of always being open to new ideas. “The learning never stops and also, in my opinion, should continue even after you have obtained your degree.”

Miller, working together with his leadership team from multiple national laboratories and universities, and in collaboration with industry stakeholders, developed the vision for IDAES and defined the key capabilities of the computational tool and its application areas. He said there’s always more to come as he looks to the next big project.

“There are several exciting opportunities on the horizon that range from IDAES 2.0 to new opportunities for collaboration among the national labs to work on integrated hybrid energy systems,” he said. “It has been very exciting to bring together teams of talented, multidisciplinary researchers with a variety of backgrounds, expertise, and perspectives to holistically tackle significant challenges. Working together as a tightly integrated team helps to accelerate advances and more rapidly be able to apply them to address the nation’s energy future.”

Photo Caption: The IDAES Integrated Platform team includes top-tier researchers from around the world employed at labs and universities throughout the nation working in concert with NETL (photo captured prior to March 2020).