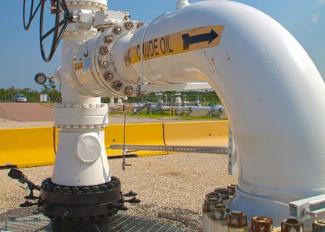 A public-private research effort led by NETL with Oceanit Laboratories Inc. has produced an ultra-thin surface treatment that could significantly improve the reliability of the nation’s extensive energy pipeline network by reducing corrosion and surface friction on pipe walls.

More than 2.5 million miles of pipeline deliver natural gas and oil to homes, businesses and industries across the United States. Taking steps to ensure safety as the network ages and prevent disruptions in the flow of critical energy resources was the focus of the collaborative effort.

During its four-year project with NETL, which ends in September 2020, Oceanit has accelerated the development of a friction-reducing agent called DragX, a novel treatment that bonds to the pipe to create a durable internal surface that provides flow assurance while preventing corrosion and debris adhesion.

Corrosion and scale deposits inside pipelines disrupt flow and decrease transport efficiency, adding costs by requiring additional pipeline pressurization and contributing to lost product from a leak or rupture and unplanned emergency shutdowns.

Other technologies to reduce the buildup of deposits and increase flow efficiency have had limited success or have been costly. For example, the use of pipeline intervention gadgets, or “pigs” as they are known in the industry, to dislodge or scrape away internal deposits are effective but are time-consuming and do not prevent future corrosion or deposits.

DragX is unique because it does not require scraping pipe interior to bare metal before application. Instead, it utilizes nanocomposite technology that requires minimal surface preparation, is effective at a fraction of the thickness of other coatings and has a cure-time of less than two hours.

NETL works closely with industry partners to accelerate the development and commercialization of needed technology to ensure reliable supplies of energy for the nation. The collaboration between NETL and Oceanit has been a prime example of how such a partnership can work.

“This project has created a cost-effective product that has tremendous potential to help maintain our vast pipeline network. It also could prove extremely useful to mitigate leaks and other environmental issues that can occur due to damage caused by pipeline corrosion,” said William Fincham, a project manager in NETL’s Technology Development and Integration Center.

Other performance characteristics of DragX include:

NETL’s support was critical to complete testing. One test involved applying DragX to a complex “unpiggable” line, which included four long-radius bends and two vertical sections. Under these circumstances, a 150-foot stretch of heavily corroded line was refurbished with DragX at a cost significantly below that of traditional epoxy treatment and has been protected from additional corrosion and deposition for the past 18 months.

Oceanit also performed DragX applications on several pipelines of varying diameter from 2-8 inches, with the longest application being roughly five miles. After receiving these field test results for both surface roughness and pressure drop improvement, Oceanit was requested to perform an analysis for application on an existing 30-inch diameter, 70-mile gas transmission line made up of bare carbon steel capable of 300 million standard cubic feet per day throughput.

“Within 24 months, Oceanit’s novel treatment system with the capability to drastically improve pipeline performance was rapidly adapted, optimized and deployed on a low-risk, active system. Just 12 months after that, DragX was ready to be fully deployed on a critical asset with high-stakes risks such as potential downtime and reduced production,” Fincham said.

“The partnership between NETL and Oceanit was the driving force behind commercialization and deployment of this technology, which has the potential to provide real-world economic value to operators and improved safety to the public,” Fincham added.

Additional field trials with commercial partners are planned to validate DragX for use in pipeline applications transporting natural gas products, crude oil products, wastewater and produced water (water that is produced as a byproduct during the extraction of oil and natural gas).