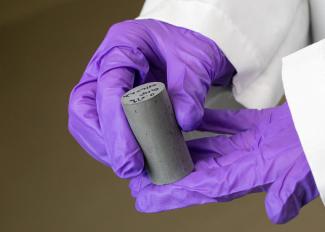 Ongoing NETL research into advanced concrete additives could one day revolutionize the construction of bridges and other infrastructure, saving communities money and time while also spurring economic demand for one of the nation’s most abundant and historic resources: coal.

Due to its low cost, versatility, and malleability concrete remains the most popular construction material in the world. However, concrete, at least in its conventional cement paste composition, has several limitations.

These include susceptibility to chemical corrosion from the salts used for deicing roads and deterioration from the freeze-thaw cycles that occur when water penetrates cracks during winter months. Traditional concrete also suffers from lower tensile strength, which is the maximum stress that a material can withstand while being stretched or pulled before breaking. These drawbacks lead to lengthy and costly inspection periods and repairs, often disrupting the flow of traffic and public life in general in the process.

However, a concrete additive containing a carbon nanomaterial called graphene can counter some of these drawbacks due to its excellent mechanical and physical properties. For example, graphene nanomaterials could fill the smallest of cracks within the cement structure as it hardens, increasing the durability and longevity of the structure by preventing salt and water from penetrating the concrete and causing damage.

Over the past three years, NETL has developed the idea of producing graphene materials from coal, marking a significant development because graphene is traditionally sourced from graphite, which is a far more expensive feedstock.

Graphene is an allotrope of the element carbon. This means it possesses the same atoms, but arranged in a different way, giving the material different properties like how diamonds and graphite are both made of carbon but with very different properties. Lightweight, flexible, and thinner than human hair while being several times stronger than steel, graphene possesses tremendous potential for replacing certain materials while enhancing others already in common use such as concrete.

“We have found that coal-based nanomaterials could improve the mechanical properties of cement composite by 20-25 percent and increase resistance to water damage by two orders of magnitude,” explained Yuan Gao, a research scientist leading NETL’s work on graphene enhanced concrete. “We can reach similar levels of improvement regarding concrete’s strength and durability via graphene, but at reduced expense.”

The cost of making graphene concrete additives sourced from graphite remains one of the biggest impediments to widespread commercial use of the material. However, if it could become a mainstay, Gao said this could create more economic activity downstream because coal is more abundant and cheaper to extract.

“Concrete is the most widely used construction material, with 10 billion tons of it produced every year around the world,” she said. “Large-scale application of coal-based carbon nanomaterials in concrete could greatly promote the consumption of domestic coal.”

NETL’s work in graphene-enhanced concrete material is currently at lab scale. NETL’s Christopher Matranga, with the Lab’s Functional Materials Team, said the next step in this leading-edge research is seeking out industry partners for collaboration that can put these materials to the test on a large scale.

“All research we do at NETL is to discover and innovate and then transfer that knowledge and technology to the public by partnering with industrial partners who can develop the technology further and commercialize it,” he said. “Right now, we’re trying to find external partners that would be interested in developing this technology or licensing it. Those are the first big steps in moving toward commercialization.”

Going further into the future, Gao said the Lab also plans to examine the electrical and thermal properties of its composite materials, such as self-sensing and heat management capabilities, which could not only lengthen the lifespan of concrete infrastructure but help engineers more accurately detect damages and stresses. She said NETL plans to explore the use of graphene in other constructional materials, such as asphalt.