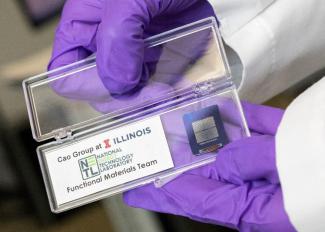 “Coal is an abundant natural resource in the United States,” NETL researcher Christopher Matranga said. “And while it is generally associated with energy production, coal naturally contains graphite-like carbon structures that make it ideal for producing graphene-type nanomaterials.”

Matranga and the other researchers on the Functional Materials Team have already proven that cheap and abundant coal feedstocks can be used to affordably synthesize these materials for a variety of applications, including stronger and more durable cement. In this project with UIUC, the NETL team processed domestic coal to create graphene quantum dots — small fluorescent nanoparticles with sheet-like structures — that were sent to UIUC, where they were used to fabricate an advanced type of computer memory chip called a memristor.

“Memristors are unique because they retain memory when power is switched off,” NETL researcher Congjun Wang said. “Carbon-based memristors are also energy efficient, high-speed, scalable for miniaturization of electronic components and can be integrated on top of silicon chips.”

Memristors made with the NETL coal-based quantum dots outperformed those made with conventional materials due to their unique carbon structure, low cost, low power consumption, low variability between devices and power cycles and good device stability.

“The devices remained stable after thousands of read/write cycles and hundreds of hours of testing,” Wang said. “These improvements will enable faster and more efficient computing.”

This project is another example of how NETL is working to create new jobs, products and markets in coal. The current market for memory devices is around $137 billion and is rapidly growing to support the rising deployment of advanced computing technologies. Successful commercialization of memristors created with the NETL coal-based materials could offer new economic opportunities for the nation’s most abundant domestic resource.