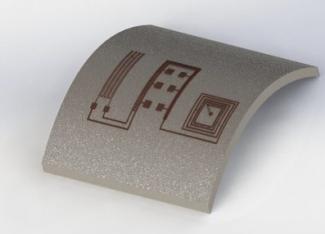 As part of the NETL-managed University Coal Research (UCR) program, a team led by Carnegie Mellon University (CMU) recently completed a project that contributed to the training of several university students and researchers while advancing sensor technology to measure strain in an extreme environment. The team leveraged advanced 3D printing techniques to create new in-situ monitoring sensors capable of measuring the strain, or pull, on an object — even in the high-temperature environments of fossil energy applications. The team’s novel sensors have potential to lead transformative improvements in system performance and efficiency, resulting in more affordable and reliable energy for the nation.

Strain gauges are important components of many engineered creations, including bridges, airplanes and railroads, but in energy systems like coal-fired power plants, in-situ measurement of strain is especially difficult due to high heat and pressure. In the project, CMU Associate Professor Rahul Panat and his team of researchers from Washington State University and the University of Texas at El Paso (UTEP) turned to 3D printing to devise a solution.

Traditional strain gauges are manufactured as a solid film, and as they are stretched end-to-end, the film contracts, or narrows side-to-side. Greater contraction leads to more sensitivity for the sensor; however, a solid film can only contract by a ratio of 0.5 compared to how far it is stretched. The researchers discovered they could use an aerosol jet 3D printing method to create a porous film that can contract by a ratio of approximately 0.7, or around 40% more, which significantly increased sensor sensitivity. In addition, the porous films created by CMU are much more resistant to thermal expansion, which also helps to reduce errors in the sensing process due to the natural expansion of solid materials at high temperatures.

This successful research project supported nine student researchers, including two doctoral students, two master’s students, two undergraduate students and three postdoctoral researchers. Additionally, three of the students were affiliated with UTEP, which is a Minority Serving Institution, including one Hispanic, first generation college graduate. The students regularly presented the high-temperature sensor work at prestigious conferences and universities as invited talks, and seven peer-reviewed journal papers were published on this work, with two others in preparation. Many of the students have transitioned to prominent positions in industry and academia, including the Intel Corporation and Blue Origin.

UCR was designed to prepare the next generation of scientists and engineers to meet future energy challenges, and this CMU-led project represented an excellent example of the value of the program, in which university students collaborated to solve an important problem, significantly improving the sensitivity of strain gauges and increasing their capabilities in high-temperature applications.

NETL research is providing breakthroughs and discoveries that support domestic energy initiatives, stimulate a growing economy, and improve the health, safety, and security of all Americans. Highly skilled men and women at NETL’s sites in Albany, Oregon; Anchorage, Alaska; Houston, Texas; Morgantown, West Virginia; and Pittsburgh, Pennsylvania conduct a broad range of research activities that support DOE’s mission to advance the national, economic, and energy security of the United States.