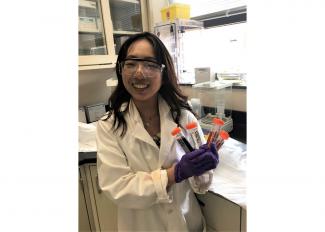 An NETL collaboration with the University of Wyoming to develop technologies and methods for extracting rare earth elements (REEs) from coal ash is taking a major step forward with a recently awarded grant from the U.S. Department of Energy’s Technology Commercialization Fund.

The project will work toward scaling up a patent-pending extraction technology developed by NETL researchers Christina Lopano, Ph.D., and Mengling Stuckman, Ph.D., and will ultimately result in a pilot-scale production facility. By demonstrating the economically viable production of rare earth elements from coal-related feedstocks, the project has potential to launch a new industry in extracting critical REE materials from the ash of Wyoming’s Powder River Basin coals.

“The core of our research at NETL is built upon utilizing fundamental research, in this case, characterizing how metals are bound in materials, to develop thoughtful extraction methods to minimize waste and environmental impacts,” explained Lopano, who serves as principal investigator. “Through the expertise provided by the University of Wyoming and partners for materials available in the basin, and the extraction expertise of NETL, the team will identify promising ash materials for extraction and upscaling.”

Rare earth elements are 17 elements within the periodic table, including the lanthanide series and elements scandium and yttrium, that are essential for modern technologies — cell phones, LED screens and solar panels all rely on REEs. Although abundant in nature, REEs are often found in low concentrations and challenging to extract. China provides the bulk of the world’s supply.

The newly funded project builds on prior NETL research to characterize the concentration of rare earth elements in Wyoming coal ash. Tom Tarka, with NETL’s Energy Process and Analysis Team, explained that advanced characterization is essential to develop an economically viable way to recover REEs.

“NETL research has focused on better understanding REEs and their binding environments so we can develop an effective method to optimize REE extraction,” Tarka said. “This project will scale up the extraction technologies we’ve developed and deploy those technologies in a demonstration facility, which is a significant step toward commercialization.”

In addition to the demonstration facility, which will be constructed during the third year, the project aims to identify the most promising feedstocks in the Powder River Basin for the extraction of rare earth elements and critical metals, and to demonstrate the efficacy of extracting those elements and metals in an economic manner.

Wyoming is the nation’s top coal producer, with significant potential to recovery rare earth elements from its coal resources. Experts predict that rare earths could ultimately be an economic development opportunity for Wyoming while providing national security benefits as well.

Funding for this project was among $33 million announced June 11 for 82 projects supported by the DOE’s Technology Commercialization Fund with over $36 million in matching funds from the private sector. DOE received over 220 applications for 2020 funding, with project teams engaging more than 130 different partners across multiple diverse disciplines.

The U.S. Department of Energy’s Technology Commercialization Fund (TCF) was created to advance the commercialization of promising energy technologies and strengthen partnership between DOE’s national laboratories and private-sector companies to deploy these technologies to the marketplace. Funds are matched with contributions from private partners.

The TCF is designed to increase the number of energy technologies developed at DOE’s national labs that graduate to commercial development and achieve commercial success. The fund also enhances DOE’s technology transitions system with an enterprising and competitive approach to lab-industry partnerships. Through the TCF, the applied program offices and national laboratories can pursue a strategic, forward-looking, competitive approach to commercializing technologies from lab-industry collaborations.