The objective of this project is to address bandwidth and parallelism deficiencies in currently available undersea wireless optical communications technologies. These goals will be achieved using tight beam focused free space optical networks of blue-green light amplification by stimulated emission of radiation (LASER) nodes distributed along the seafloor, allowing for a highly scalable network backbone connecting a wide array of residency sensors as well as command and control devices. Enabling residency for constant real-time monitoring and control will drastically increase operational efficiency and safety. This effort will include electronic/optical encoding optimizations, optical alignment technology improvements, marinization, and a demonstration of network scalability.

According to the U.S. DOE, Enhanced Oil Recovery (EOR) is capable of increasing well recovery from 20–40% to 30–60% of original oil-in-place. Enabling this capability requires persistent and timely reservoir monitoring to understand reservoir response to EOR methods. Near real-time monitoring of reservoir response to EOR operations informs Operators to employ rapid reservoir optimization and intervention measures to increase productivity and reduce risk. Current reservoir monitoring suffers from seismic data collection and processing times that limit the number of mappings and timeliness of obtaining reservoir seismic mapping. This monitoring and control gap limits the effectiveness of EOR in the subsea.

Underwater Laser Telecommunications and Remote Access (ULTRA) technology is a transformational change that will greatly impact the EOR operational paradigm with the capability to monitor reservoirs in near real-time. This change is labeled as Near Real-time Reservoir Management (NRRM), which could be enabled by modifying existing 4D reservoir monitoring systems with a high data rate communication system that enabled rapid data exfiltration to the operator. 4D seismic monitoring enables temporal change detection of the 3D state of a reservoir, which enables the operator to view the dynamic response of the reservoir during waterflood or other EOR operation. This awareness will enable actions that can increase well productivity and reduce risk in operations to maintain a License to Operate.

Oceanit marinized the ULTRA node prototypes in advance of the planned ocean test at Kilo Nalu, seen in figure 1, to demonstrate the capabilities of the technology. The completed prototype systems underwent compatibility testing at the University of Hawaii to ensure plug and play functionality prior to deployment at the selected open ocean testing site. The ULTRA node prototypes utilize acrylic housings populated with all the electronic, optical, and power systems required for operation. These tests provided valuable data on ocean water quality and laser effectiveness. 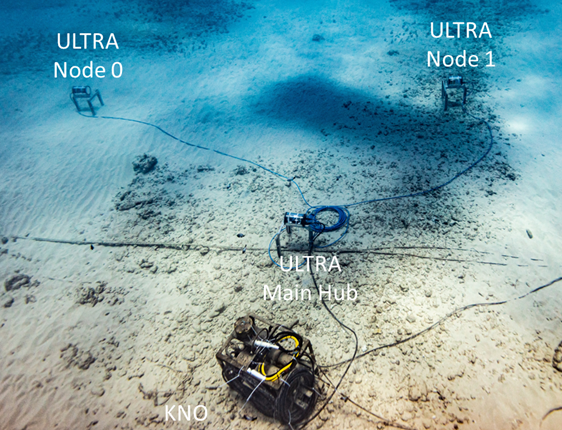 Oceanit developed and integrated a multicolor free-space optical data transmission system adapted to connecting a distributed ocean bottom node network. It is designed around providing simultaneous bi-directional data transmission at 100Mbit/s over multiple sequential and parallel links. The transmitter node, shown in figure 2, is currently installed on the ocean floor for the initial functionality and characterization tests. 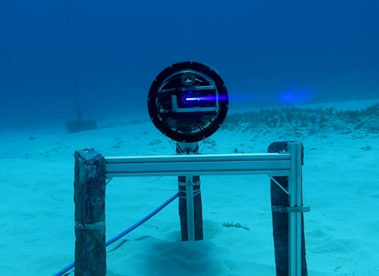 Oceanit has developed and integrated a beam stabilization system that maintains a point-to-point connection. This system compensates for relative movement as well as beam deflection due to environmental factors. An overview of how the system functions is shown in figure 3.

Oceanit completed deployment of the system on May 11th 2022 and is performing in ocean tests of the various prototype subsystems associated with the project. These subsystems include the acquisition system, the stabilization system, and the watertight housings. The tests are being performed a quarter mile offshore as shown in figure 4, at a depth of 40 feet. This allows for rapid evaluation of various system components and concepts of operation. The site is also where the system will eventually be deployed for the first time, so it represents the real-world conditions it is likely to encounter.

Oceanit has developed and integrated a network topology for a deployable system that is able to interface with several internal systems while also linking the experiment to internet through a secure gateway as shown in figure 5. The system links two subnets with one to allow for access from anywhere in the world with an internet connection, and the second subnet handles all of the inter-device communication and data forwarding.

The system was remotely accessible from the Oceanit office for command and control. The data gathered during this test will be used to further refine the design for future iterations and testing. Planning for future tests in shallow and deep water are currently underway.

Per Amendment 0001 to this contract, Oceanit has provided the information for all foreign nationals working on and expected to be working on the project to the DOE Contract Specialist.