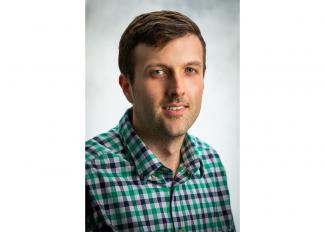 Today’s U.S. electricity grid consists of millions of miles of transmission lines that bring power to hundreds of millions of electricity customers across the country, so ensuring the security and reliability of this vital infrastructure is a top concern for NETL. The Lab continues to advance energy storage technologies for future deployment, but grid reliability also requires an understanding of the interaction between various sources of electrical power, especially during periods of increased demand like severe weather events. Energy Markets Analysis team member John Brewer is an engineer who dedicates much of his time at the Lab supporting this goal through valuable analyses of programs and technologies for the U.S. Department of Energy’s (DOE) Office of Fossil Energy (FE).

Brewer has worked as an engineer at the Lab for more than 10 years (6 as a contractor and 5 as a federal employee), but engineering wasn’t always his first choice.

“I had always intended to go into the study of history, but during a recruitment visit to the University of Virginia, I was given a table of starting salaries by major,” said Brewer. “That quickly changed my mind to engineering and staying home and going to West Virginia University.”

The choice worked out well for Brewer, as he completed the mechanical and aerospace dual engineering degree program in four years instead of the normal five while working as a teaching assistant for the freshman engineering program and in one of WVU’s materials science labs.

“Our current analyses focus on proving the value of fossil energy as the grid transitions to more renewables and lower carbon resources,” Brewer said.

For example, Brewer and his colleagues published a series of reports demonstrating that additional natural gas pipeline capacity and baseload generation units — such as coal and nuclear generation — are critical to providing reliable and affordable electricity during extreme weather  such as the winter storm and cold weather event known as the “bomb cyclone” that occurred in early 2018. Both are vitally important to meeting U.S. energy needs as more intermittent electricity sources, such as wind and solar, come onto the U.S. electricity grid.

The analysis of the bomb cyclone showed that natural gas demand, coupled with natural gas infrastructure constraints, led to significant spikes in natural gas prices. Coal and nuclear power sources lessened the impact of gas constraints and elevated gas prices and ensured reliable operation of the bulk power system. It also concluded that further retirements would reduce the flexibility of generation in the face of other extreme events. This and other work by Brewer and his colleagues have been widely recognized, and the team received the Secretary of Energy’s Achievement Award last November.

“We also recently received a funding award from DOE’s Office of Cybersecurity, Energy Security and Emergency Response,” Brewer said. “We are planning to develop an integrated oil and natural gas infrastructure analysis capability for their EAGLE-I platform, a real time situational awareness tool for the nation’s energy infrastructure, to assist in pre-event evacuation and post-event recovery.”

Brewer’s responsibilities have increased over the years with NETL as he transitioned from a contractor to a federal role. For instance, he is currently NETL’s main interface with the North American Electric Reliability Corporation and many of the other entities responsible for operating the grid and maintaining its reliability.

“We’re always looking to the horizon,” Brewer said. “The grid and markets space are always changing, so there’s a constant need to adapt and think about the next questions we need to ask to keep from getting passed by.”