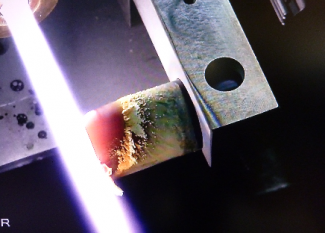 NETL-led research shows the possibilities and benefits of developing magnetohydrodynamic (MHD) power generation such as improved efficiency for fossil fuel power plants and reducing the costs of implementing carbon capture.

MHD generation works by taking direct kinetic energy from fast-moving ionized gases and converts it into electricity without any moving parts. This is done through the Lorentz force, which deflects opposite charged particles away from each other in a strong magnetic field. By collecting oppositely charges on electrodes, an electrical potential or voltage is developed that can be used to drive external loads.

Peter Hsieh, with NETL’s Structural Materials Team, said the conditions to make an MHD generator work can be applied in solar, nuclear, and fossil fuel power plants to increase energy efficiency and drive down the costs of carbon capture. Carbon dioxide and water vapor are the only combustion products in oxy-fuel fired power plants, and the latter is readily separated through condensation. MHD generation makes oxy-fuel combustion more economical by helping to recoup the energy needed to separate oxygen from air.

Other potential benefits of MHD generators include reduced equipment size which in turn lowers capital costs. Operational costs are also lower, while more efficiently utilizing its fuel source. The MHD process can generate large amounts of power, is suitable for peak power generation with no pollution while the lack of moving parts ensures reliability.

NETL continues to work on addressing the challenges posed by MHD power generation, one of which is the materials standing up to ultra-high temperatures of the oxy-fuel cycles used in their operations. Potential solutions to the loss of mass at high temperatures explored by the Lab include platinum cladding via explosive and ultrasonic welding, along with ceramic coatings and electrodes.

“Much of the early research on ultra-high temperature materials stems from the Space Race,” Hsieh said. “For example, the oxy-kerosene fuel-oxidizer mixture is used in missions to the moon. Essentially, we’re trying to come up with materials used in rocket nozzles but without active cooling systems, which is a very challenging problem. In engineering, it’s often the materials that dictate what you can do.”

Together with its partners in academia and industry, NETL is the only national laboratory currently pursuing MHD power generation research. NETL’s MHD Lab in Albany continues to break new ground in ultra-high temperature MHD generator technologies that incorporate new, innovative ceramics designed to operate above the boiling point of potassium metal, a common ionization aid for MHD systems.

Hsieh said more improvements are expected as time goes on. While much of the MHD power concepts stem from past DOE funded research, further work in the 1980’s was hampered by technological limitations that are no longer a factor.

For example, 3-D printing technologies are being used to craft the components for new MHD generators, which is much easier and cheaper than machining the individual parts by hand. Furthermore, Hsieh said computational modeling tools, which weren’t available in the 1980s, can help engineers evaluate channel designs at a fraction of the cost of building physical models or prototypes for each iteration.