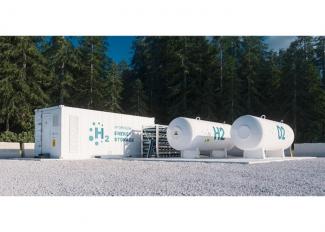 NETL expertise is finding new ways to transform coal and natural gas into chemicals, including the lightest element listed in the periodic table, to resolve a heavy burden for operators of the U.S. electricity grid system.

Partnering with leading university researchers and industry, NETL plans to advance the use of fossil fuels in an environmentally responsible manner to generate hydrogen and other forms of chemical energy, which will be stored for long durations and used when needed to produce electricity and valuable products, ensuring affordable, reliable and clean electric power for generations of consumers.

Hydrogen (H2) gas, with an atomic structure of two protons and two electrons, can be produced from coal and natural gas to serve as an important energy storage medium in the Advanced Energy Storage Program. NETL is developing the program in conjunction with the U.S. Department of Energy’s (DOE’s) Office of Fossil Energy (FE).

To move these efforts forward, FE recently issued a funding opportunity announcement to support research and development that integrates fossil assets with thermal, chemical and other potential energy storage applications to ensure affordable and cleaner power for the next generation.

The need for a robust energy storage program and the significant role hydrogen produced from coal and natural gas may play in it were outlined on April 22, the 50th anniversary of Earth Day, by Briggs White, Ph.D., technology manager at NETL, who addressed more than 300 federal policymakers and researchers as the featured speaker at a U.S. Energy Association webinar.

White noted that the electricity grid is a complex system. Constant adjustments are needed to meet changes in demand, such as the daily patterns of human activity, as well as unexpected fluctuations caused by equipment overloads and storms. Stored hydrogen produced from fossil fuels could be tapped when needed to produce electricity and create a cleaner, flexible and reliable grid system.

White also explained that the development of energy storage is a priority as more renewable, intermittent energy sources, such as wind and solar energy, are brought online. Renewables need to be supplemented with long duration energy storage, especially during peak demand and for seasonal shifting of energy from periods of abundance to periods of scarcity or when there is little sunshine or wind.

Hydrogen produced from fossil fuels offers a viable solution to address those challenges. “The Office of Fossil Energy has been investing in hydrogen-related technologies for years,” White said. “There already is in existence an infrastructure for hydrogen generation using the nation’s abundant resources of coal and natural gas,” White said.

NETL has pioneered coal gasification technologies to produce hydrogen. Hydrogen gas is produced by first reacting coal with oxygen and steam under high pressure and temperature to form synthesis gas, a mixture consisting of primarily carbon monoxide and hydrogen.

After the impurities are removed from the synthesis gas, carbon monoxide in the gas mixture is reacted with steam to produce additional hydrogen and carbon dioxide (CO2). Hydrogen is removed by a separation system, and the highly concentrated CO2 stream can be subsequently captured, stored and utilized, another area of NETL expertise, to prevent greenhouse gas emissions. DOE anticipates that coal gasification for hydrogen production with carbon capture, utilization and storage could be deployed at-scale given the right set of market conditions in the mid-term time frame.

Natural gas reforming using steam accounts for most of the hydrogen produced in the United States annually. White pointed out that electrolysis (using an electric current to split water into hydrogen and oxygen) also could be used to create hydrogen to complement hydrogen made from fossil fuels. In this way, renewable electricity from wind or solar sources could be used to create hydrogen and supplant fossil-based hydrogen to decarbonize electricity generation and other applications

H2 production technologies are gaining attention because hydrogen, a zero-emission fuel that produces heat and water, is predicted by many to be the energy carrier of the future. Not only can hydrogen be combusted in a hydrogen turbine to generate electricity, it may also be used for transportation and industrial applications like steelmaking. When hydrogen is used in these non-power applications, greenhouse gas emissions from the transportation and industrial sectors may be nearly eliminated.

Solid oxide fuel cells (SOFCs), a major component in NETL’s R&D portfolio, convert chemical energy from a fuel directly into electrical energy. A fuel source such as hydrogen or natural gas is fed into the SOFC system to produce electricity. Because SOFCs produce electricity through an electrochemical reaction and not through a combustion process, they are much more environmentally friendly than conventional electric power generation methods due to higher efficiencies, reduced water usage and reduced CO2 emissions.

Research has demonstrated that introducing hydrogen into natural gas pipelines can improve the U.S. electric power industry footprint by proportionately reducing emissions of CO2. By blending hydrogen with natural gas, carbon emissions created by the combustion process can be significantly reduced. For example, General Electric has found that using a modest 5% blend of hydrogen in the natural gas supply to a gas turbine can reduce annual CO2 emissions by nearly 19,000 tonnes.

The nation’s existing natural gas pipeline infrastructure has the potential to expand the transportation of hydrogen. Blending hydrogen into natural gas pipeline networks may be an option for delivering pure hydrogen to markets. Separation and purification technologies can be used downstream to extract hydrogen from the natural gas blend near the point of end use.

For power generation applications, hydrogen storage in underground salt caverns is a common method. Alternative methods are being evaluated given that each plant location will have different subsurface resources.

In Texas, underground salt caverns have been used to store hydrogen produced from natural gas since the 1980s. Salt’s impermeability makes such caverns well-suited for underground storage of liquid and gaseous hydrogen.

Mitsubishi Hitachi Power Systems and Utah-based Magnum Development have taken salt dome hydrogen storage to the next level. Their project beneath Delta, Utah involves injecting water into a dome and creating a brine that can be pumped out, leaving a cavern to hold massive volumes of hydrogen.

White also noted that ammonia, a compound traditionally used to make fertilizers for crops, has been used in energy storage projects. Produced by combining hydrogen and nitrogen, the ammonia is stored in a tank and converted into electricity when needed, either through traditional combustion methods or by “cracking” it into nitrogen and hydrogen. In the latter method, the hydrogen can then be used in hydrogen turbines or fuel cells to create power.

AST is developing a system to produce contaminant-free synthesis gas (syngas) from coal through a fluid bed system for drying, devolatilization and gasification, providing operational flexibility to meet the evolving demands of modern power systems. The syngas cleanup includes pre-combustion CO2 capture. The process is designed to produce clean synthesis gas that may be used in a combustion turbine to produce electricity and to synthesize fuel for chemical-based energy storage.