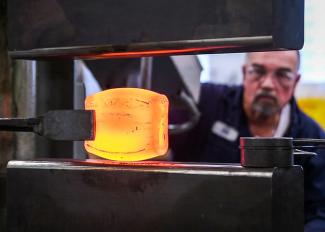 Completed by a team at NETL’s facility in Albany, Oregon, an internationally recognized center of excellence for alloy fabrication, the study validated the application of ML analysis to enable more rapid and exceptionally accurate design of high entropy alloys (HEAs) — critical materials for ultra-efficient power generation — and eliminate the trial-and-error method and other models to develop these advanced materials.

HEAs are alloys constructed with equal or nearly equal quantities of five or more metals, combining the strength and characteristics of the individual elements into a superior substance. Unlike conventional alloys, HEAs possess special properties, including outstanding wear resistance, exceptional high-temperature strength and structural stability, and superb corrosion and oxidation resistance, all characteristics needed to achieve maximum benefits in advanced power stations.

For instance, boilers and other components made from HEAs will enable power plants to burn less fuel and operate with greater efficiency at increased temperature and pressure levels. HEA components also are better equipped to withstand the stresses of frequent power plant startups and shutdowns required for integration of renewable energy sources (solar and wind) into the grid.

The researchers, whose study “Machine-learning informed prediction of high-entropy solid solution formation: Beyond the Hume-Rothery rules” was published in npj Computational Materials, noted that many of the existing scientific rules or parameters to predict solid solution formation are impractical for developing compositionally complex alloys. Still others were developed using small data sets. “Therefore, it is not surprising that the predictability of these rules is generally problematic,” the researches stated.

To address this issue, the NETL research project team, led by Michael Gao, analyzed a data set of 1,252 multicomponent alloys, an unprecedented number. The researchers found that ML screening can be used to accurately and efficiently predict HEA formation using a wide range of compositional elements. It also identified a short series of the most important features, such as a substance’s resistance to compression, for use in a model to predict formations of solid solution alloys.

The study showed a 94% consistency rate in achieving accurate predictions, which was confirmed using other computational methods. The researchers stated their work greatly extends the original set of HEA formation rules developed by William Hume-Rothery, which are widely used to predict if elements will form a solid solution, rather than separating, and make viable candidates for alloy creation.

The importance of HEAs takes on heightened significant as NETL moves forward with transformative power technologies to ensure a reliable supply of electricity for U.S. homes, businesses and industries using the nation’s abundant resources of coal and natural gas in an environmentally responsible manner.

NETL’s development of advanced ultra-supercritical steam cycles and the use of supercritical carbon dioxide (sCO2) for power generation have the potential to increase efficiencies and bolster clean coal efforts. However, these systems operate at higher temperatures and pressures, leading to more corrosive and harsher environments compared to traditional power plants.

The NETL study was completed in support of the U.S. Department of Energy’s Fossil Energy Crosscutting Technology Research Program. In addition to Gao, other authors were Zongrui Pei, Junqi Yin, Jeffrey A. Hawk and David E. Alman.