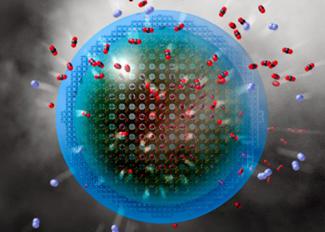 Researchers at NETL are one step closer to solving one of the most difficult problems associated with developing post-combustion carbon dioxide (CO2) capture technology. The team has developed a new process to create a chemically bound, dual-layer membrane or sorbent that combines the benefits of high permeability and high selectivity – two material qualities that are usually mutually exclusive – to more effectively separate CO2 from nitrogen found in power plant flue gas.

This first-of-its-kind research supports DOE’s Carbon Capture Program and could offer a path toward commercially viable carbon capture operations by providing a scalable solution with a low energy penalty, high performance and reduced cost that will enable the continued use of affordable and abundant fossil energy while reducing CO2 emissions. The groundbreaking work was recently discussed in an article and featured on the cover of the prestigious journal Cell Reports Physical Science.

“We began this research by looking at metal organic frameworks, or MOFs,” NETL research scientist Sameh K. Elsaidi explained. “These materials show a tremendous capacity as sorbents and inorganic membranes for CO2 separation thanks to their high surface area, adjustable pore apertures and engineered pore chemistry.”

Elsaidi noted that individual MOFs still suffer from the same trade-offs between permeability and selectivity (i.e., highly permeable membranes tend to have lower selectivity and vice versa). For example, an MOF with small pores will more effectively separate CO2, but smaller pores mean less gas can pass through at any one time, reducing cost-savings due to a longer processing time. An MOF with larger pores alleviates this bottleneck, but isn’t as selective in separating the gases, resulting in a low purity.

“So, we set out to grow two materials with different pore sizes on top of each other to form a dual-layer composite membrane,” Elsaidi said. “This would give us the best of both worlds in terms of both high selectivity and high permeability.”

Dual-layer composite membranes have been explored using other materials, including MOFs, but the key difference in this research is the fact that Elsaidi and the NETL team are combining MOFs with different lattices, which are the result of the crystalline structure of the material. Different MOFs can have different lattice structures that vary in size and shape, so they don’t usually line up with one another. The NETL team created a process to chemically bind the two layers at the interface, even if their lattices are differently sized and shaped, without creating any defects. Elsaidi used a technique well-known to researchers called continuous flow for the first time in controllable and scalable layer by layer growth, leading to regulated thickness for each layer.

“Developing a chemical interaction between the layers of the composite membrane is key to optimizing their growth and interfacial compatibility,” Elsaidi said.

Elsaidi explained that because more than 60,000 MOFs have already been created and characterized, the NETL team can save time and reduce costs by selecting existing MOFs, many of which are promising adsorbents and membranes, to form their composites. They have shown that it’s possible to successfully combine two MOF structures to take advantage of both of their constituents. The same process could be used to combine three or even four MOFs to create an almost unlimited number of composite materials with unique properties unachievable through a single-component system.

Elsaidi came to NETL through the Faculty Researcher Program, one of three Oak Ridge Institute for Science and Education programs at NETL. He earned his bachelor’s degree with honor in chemistry from Alexandria University in Egypt, where he also worked as a tenure-track assistant professor in their chemistry department. Elsaidi went on to earn his doctorate in inorganic chemistry at the University of South Florida. He then returned to Alexandria University as assistant professor in 2015. Since then, Elsaidi has also conducted research at the Pacific Northwest National Laboratory and the University of California, Berkeley.

Image caption: Artist rendering of a highly permeable and highly selective, dual-layer membrane as it separates carbon dioxide form nitrogen. The image was developed by NETL Multimedia Specialist Mike Gipple and selected to be used as the cover art for the May edition of Cell Reports Physical Science.