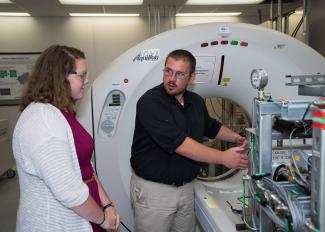 Driving much of that impressive volume is the need to complete rock core characterization studies to support large-scale geologic carbon sequestration and to make that data available to the public.

NETL supports projects to safely and permanently store carbon dioxide (CO2) from power plants and other industrial sources by injecting it into deep underground reservoirs capped by layers of non-porous rock. These efforts not only reduce emissions of greenhouse gases; they also support continued use of abundant fossil fuels such as coal and natural gas in an environmentally responsible manner.

NETL core characterization work is a critical component to the success of these projects, providing the data needed for accurate decision-making. Crandall and other researchers at NETL’s geoimaging center use sophisticated technology, including three computerized tomography (CT) scanners and a multi-sensor core logging unit, to gain insights into the physical characteristics and elemental composition of rock formations from cylindrical samples extracted from thousands of feet below the surface.

The program has been a rock-solid success. “This year, we are on track to scan another 3,000 feet of rock core samples,” said Crandall, research engineer, Geological and Environmental Systems Directorate, at the NETL site in Morgantown, West Virginia.

Traditional petrographic and core-evaluation techniques typically aim to determine the mineral make-up and structure of rock cores by sectioning or cutting the core to capture details of the sample’s internal composition. NETL takes a non-destructive approach.

CT scanning processes thousands of two-dimensional X-ray measurements taken from different angles to produce three-dimensional images of a scanned object, allowing the user to see inside the object without dividing it into sections. Additionally, NETL’s scanners are equipped with temperature and pressure controls to enable in-situ flow testing, which can simulate subsurface conditions to evaluate how injected CO2 would move through rock pores and fissures or dissolve with natural brines, mineralize or react with other fluids.

“We use this non-destructive technology to determine porosity, permeability, fracture properties and composition while leaving core samples obtained from the subsurface — which can be difficult or costly to attain — intact and available for further testing,” Crandall said.

It’s important and fascinating research for Crandall, who has worked at NETL for 17 years. “These are natural structures, and nature doesn’t have a set rulebook,” said Crandall, adding that the core samples he studies range from dense granites to fragile sedimentary rocks that “will fall apart if you look at them the wrong way.”

The core characterization program also utilizes other unique tools developed at NETL. “When we scan these materials, we make our images and data publicly available on EDX,” Crandall said. The Energy Data eXchange, also known as EDX, is the U.S. Department of Energy’s Office of Fossil Energy (FE) virtual platform for public curation of FE R&D data.

“Preserving our imaging work and other research digitally provides research universities and companies with high-value data that they can use in their studies or to develop safer, efficient plans to remove hydrocarbons from subsurface formations or build carbon storage models with greater accuracy,” Crandall said.

As a world leader in the non-destructive analysis of rock cores, NETL’s researchers study samples sent to Morgantown from across the United States.

Early this year, the team received a 120-foot core sample from the Wabash CarbonSAFE project. Carbon Storage Assurance Facility Enterprise (CarbonSAFE) projects focus on the development of geologic sites for the storage of 50+ million metric tons of CO2 from industrial sources. NETL currently supports projects in the pre-feasibility and feasibility phases of the CarbonSAFE initiative.

The Wabash project is evaluating the development of a commercial-scale geological CO2 storage complex at the Wabash Valley Resources facility near Terre Haute, Indiana.

Deep saline, water-bearing reservoirs offer the greatest potential for geological sequestration of large volumes of CO2. In the Midwest, the deepest most significant saline reservoir is Cambrian Mt. Simon Sandstone. Crandall said NETL has scanned all Wabash core samples of Mt. Simon Sandstone that it received and has begun testing the material with the logger.

As part of another study, which was published in March, the NETL team analyzed rock core of Mt. Simon Sandstone extracted from the subsurface in Christian County, Illinois. With the exception of a few hills, the formation can be found across Illinois in thicknesses of less than 500 feet to greater than 2,600 feet.

According to the Illinois study, the formation consists mainly of quartz with poorly sorted, coarse grains. Both the lower portions and upper sections of the formation show evidence of good reservoir quality, making it a viable target for long-term geologic CO2 storage.

Core samples also have been analyzed at Morgantown to support the Midwest Regional Carbon Sequestration Partnership (MRCSP), one of seven regional partnerships taking part in a national effort to study carbon capture, utilization and storage options for mitigating climate change.

In a study published last November, the NETL researchers discussed their MRCSP work analyzing rock core from a CO2 sequestration well in Otsego County, Michigan. The purpose of the study was to create a digital representation of the core that could be preserved for others to make decisions based on accurate data.

“While it is common for commercial entities to perform these characterizations, the resources necessary to conduct these analyses are not always available to the broader interest base, such as state agencies, universities and research-based consortiums,” the study noted.

Growing up in small town in western New York, Crandall, principal investigator for the Michigan and Illinois studies, envisioned a career in mechanical engineering and never thought he would, as he put it, “spend my days playing with rocks.”

Knowing that his work is making a difference matters to this researcher, whose outside interests include vegetable gardening and spending time with his wife, Stacey, and their 4-year-old daughter, Molly.

“We’re starting to gain some real momentum,” Crandall said. “The good work of our lab is getting out there for a variety of people to use for years to come.”