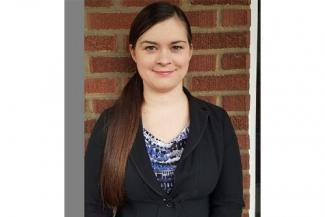 Growing up outside Detroit, Katharina “Katy” Daniels and her sisters were encouraged to pursue their dreams, even if it meant choosing a career in a field such as engineering where opportunities for women traditionally have been limited.

“Fortunately, I never had any reason to think there was a limitation on what I wanted to become,” said Daniels, a general engineer who joined NETL’s Carbon Capture Team in June.

Daniels’ parents, Lucinda and Michael Bellairs, urged their daughter to read and explore her early interests, which included rock and bug collections. In addition, they made sure Bring Your Child to Work Day was always a meaningful, hands-on experience.

“My mother was a computer technician who installed servers. I enjoyed spending the day taking apart computers or checking out circuit boards,” said Daniels. “I looked forward to it every year.”

Inspired in high school by the book “An Inconvenient Truth” that addressed climate change, Daniels believes her role at NETL is a perfect fit for someone with her background, which included organizing litter cleanups while president of her high school environment club, studying civil engineering at the University of Michigan and working as an environmental engineer and inspector for the U.S. Environmental Protection Agency.

“Engineering is about finding solutions,” said Daniels. “Carbon capture is an engineering solution to a global problem and a tool to lower carbon dioxide emissions from our current and future fossil energy systems or to make them carbon-neutral.”
As a project manager, Daniels works closely with technology developers on novel applications to achieve that goal.

For instance, Daniels and her colleagues are working with industry partner C-Crete Technologies on a CO2 mineralization project to generate high-value concrete products that store CO2 captured from coal-fired power plant flue gas.

The two-step process begins with the preparation of porous low-density materials from industrial waste (such as asphalt), which supports CO2 mineralization in the material’s pores. The resulting enriched porous carbons are then used as an additive in concrete production to impart unique properties, such as high mechanical strength, electrical and thermal conductivity, magnetic properties and hydrophobicity.

Such concrete could provide multiple benefits, including the ability to carry heat for deicing roads, sidewalks and other surfaces. According to Daniels, next steps call for a test trial using CO2 from the world’s largest carbon capture facility at NRG’s Petra Nova coal-fired power plant near Houston, Texas.

Daniels also serves as project manager for an NETL-supported project to use CO2 to produce stronger railroad ties.

Research partners at Daniels’ alma mater, the University of Michigan, are capturing CO2 from flue gas and combining it with fly ash, steel slag or mine tailings to develop a carbonation curing process for cement to produce durable railroad ties — a product critical to the U.S. transportation infrastructure. The process is designed to produce an engineered cementitious composite (ECC) exhibiting desirable physical characteristics due to its innate ability to “self-heal” via mineral carbonation reactions.

The new technology also has the potential to eliminate the use of steel to reinforce railroad ties, providing another way carbonation curing can drive down costs and reduce emissions. Railroad ties are the target product, but researchers ultimately want to learn if the carbonation process and new ECC compositions with captured CO2 can be applied to manufacture other precast items.

Prior to joining NETL in Pittsburgh, Daniels lived in Chicago and served as an EPA enforcement officer, traveling across six states to inspect industries and ensure compliance with federal emissions standards. She primarily focused on power plants; however, she also completed inspections at foundries, chemical factories, oil and gas production facilities, paper mills and even a facility that produces snacks.

While in college, Daniels interned as a researcher for SmartWay, a partnership between freight/shipping companies and the EPA to increase efficiency and reduce fuel use, emissions and operating costs.

Daniels’ relocation from Chicago to Pittsburgh has gone smoothly and has presented opportunities to participate in events held by the local chapters of the Society of Women Engineers and the American Society of Civil Engineers to introduce girls and young women to careers in engineering.

The activities at those events, such as building the tallest structure possible out of two sheets of paper and some tape, are fun and inspire ingenuity. “They certainly get creative, and it gets them excited to learn more about what we do as engineers,” said Daniels, who has a twin sister, Lizzy, a physician assistant, and an older sister, Cindy, an attorney.

Daniels and her husband, Pete, a certified registered nurse anesthetist, enjoy Pittsburgh. “I like that it’s a small city. It has everything I want, and it doesn’t take two hours to get there,” said Daniels, adding the Pittsburgh food scene is incredible. Her favorite find? A restaurant that specializes in Ethiopian cuisine.

But in some ways, Daniels remains true to her roots. “I’m still a Detroit Tigers fan,” she said proudly.