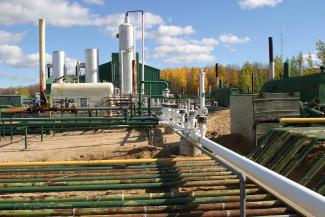 AI in Oil & Gas Production: Advancing an Industry into the Future

Through cooperation with its partners, NETL is working to advance the optimization and implementation of artificial intelligence and machine learning technologies into the nation’s energy sector.

With nearly a million wells across the country producing roughly 11 million barrels of crude oil and 4.3 million barrels of natural gas liquids per day, the United States now stands as the world’s largest producer of these resources. New technologies in the field, such as hydraulic fracturing, have greatly contributed to this production boom, the industry faces new challenges in efficiency and predicting well production.

This has been the focus for Chung-Yan Shih, Ph.D., a senior data scientist at NETL (Leidos), whose research has helped reveal how ML can offer answers energy producers as they strive to meet these challenges to keep up with demand.

Shih said the ability to predict well productivity is vital because it drives the business decisions of energy producers. However, obtaining accurate predictions presents difficulties due to the resources being underground. Even the best estimates come with significant unknowns especially considering that no two wells are the same depending on their location, production time, design, and resource extraction technology employed.

AI and ML algorithms can help overcome these challenges by making sense of multiple data sets. Taking all these variables into account, they can calculate a well’s estimated ultimate recovery and predict its performance prior to drilling. These advantages can give producers more certainty when deciding where and where not to drill.

“Currently, ML is being explored and tested widely in the oil and gas field,” Shih said. “With more technologies being validated in the operations and made publicly available as open-source or commercial packages, smaller companies and entities that might not have the research and development capabilities can use the tools and models to enhance their operations.”

He said the U.S. Department of Energy aims to become a world-leading enterprise for AI, a task NETL has embraced. Through multiple studies, Shih’s research showed how machine learning could use existing data to determine production key drivers, such as the varied geology or where to drill. Furthermore, AI appears to provide the means to estimate production for future well development on a given site.

Oil and gas producers employ ML to predict features such as faults, stratigraphy, porosities, and more. Add ML to traditional techniques has improved experts’ subsurface interpretations. Drilling and completion optimization have also benefited from ML models, which helped predict the optimal conditions for drilling and the best strategies for well completion.

Shih said this research can help NETL identify potential research and development projects to improve resource recovery, such as well stage and spacing optimization, or the impact of different compositions of fracture fluid. These hold the promise of not only increasing production but also reducing waste and cost.

He noted that while these new arenas of technology continue their maturation processes regarding energy production, they will eventually assist in various processes in all facets of the industry, and mastery of its usage will be widespread among the work force.

“I’m pretty sure, in the long run, the use of AI/ML will become almost universal once matured because it will help in almost every aspect,” he said.

“Once it’s ready for prime time, large-scale planning of operations can be greatly assisted by machine learning, which also has the potential to transform worker training. Right now, companies require a specialist, such as a data scientist, on staff to use these tools. However, in the future, you can expect everyone to be trained in its use to some degree of proficiency.”

As for predicting productivity, Shih said there are still challenges to overcome, such as obtaining the ideal level of data to have true accuracy in real-world situations. However, the use of AI/ML can provide a fresh way to think about and tackle a problem or validate the assumptions of subject experts in the field, such as reservoir engineers and geologists. Energy-related uses don’t stop with oil and gas production and can extend into environmental integrity and automation.

“The lessons learned and approaches can be applied to carbon capture and storage (CCS). These two areas face similar challenges in understanding the subsurface,” Shih said. “Right now, AI and ML efforts are also blooming in the CCS field. Both fields can benefit each other when technologies mature as cross-cutting support. Additionally, these tools can be used from descriptive to predictive analyses, where the AI and ML recommends what to do or executes the action. Like self-driving cars, autonomous drilling and operation might be realized as the technology matures.”

With the right tools for well production, data management technology and a well-trained work force, the types of problems that AI and ML can overcome are virtually limitless. The forward-looking approach is just one way NETL works to discovery, integrate and mature technology solutions to enhance the nation’s energy foundation and protect the environment for future generations.