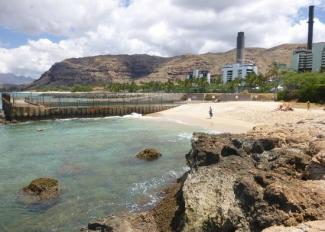 Fossil energy is vital to the nation’s security, with coal serving as the fuel that produces nearly 30% of U.S. electricity. To ensure the continued success of this critical energy resource, NETL is funding advanced research to modernize the grid and improve the efficiency of the existing coal-fired power plant fleet, which strengthens the reliability of all our electricity generation.

In coal and other fossil fuel-based power plants, high-pressure, high-temperature steam drives turbines that spin electricity-producing generators. After exiting the turbine, steam moves through the condenser where it’s converted back into liquid so it can be re-heated and re-pressurized to be used again. Condenser performance is largely dependent on how efficiently cold tubes cool the steam and condense it back to liquid.

When steam contacts the metal tubes, a film or condensation can form. This layer acts as an insulator between the cold metal and steam, limiting heat transfer and lowering efficiency.

“Condensers can also have issues with fouling, which is the buildup of scale (deposits of hard minerals, corrosion and organisms) on interior and exterior cooling tubes, which further inhibits heat transfer,” said John Rockey, Technology Manager for Transformative Power Generation at NETL.

NETL is working closely with industry partners to address these issues. One promising technology moving forward has been developed by Oceanit Laboratories Inc. and tested extensively at the Hawaiian Electric Company’s Kahe generating station located just a short walk from Oahu’s Kahe Point Beach Park, a popular area for snorkeling and scuba diving.

Oceanit’s solution to improve efficiency is a coating called HeatX™, which is applied to the surfaces of condenser components. The ultrathin, non-toxic coating forces the condensing water to form into droplets that quickly roll off, rather than adhere to, condenser surfaces.

The company’s officials presented results from field tests at the 2019 International Pittsburgh Coal Conference. They concluded HeatX™ reduced fouling on condenser units, increased heat transfer rates and significantly extended the amount of time a unit can remain in service before it must be taken down for maintenance.

Kahe burns diesel fuel, which, like coal, is a fossil fuel, to produce electricity. Oceanit anticipates testing the coating at coal-fired power plants in 2020, according to Matthew Nakatsuka, the company’s technical lead for the project.

The project is one example of efforts taken by NETL to lower emissions of carbon dioxide (CO2), a greenhouse gas, and ensure a reliable supply of affordable electricity for U.S. consumers.

“Fossil fuels such as coal are abundant and inexpensive compared to other energy sources. But energy extraction from fossil fuels is only about 40%. Much of the potential energy is lost in the condenser,” Rockey explained.

“By improving the efficiency of the condenser, less fuel needs to be burned to achieve the same levels of energy output, lowering both consumption costs and emissions,” he added.