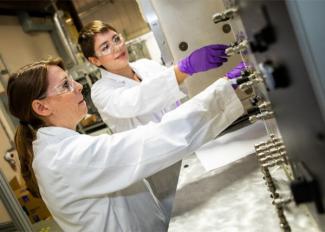 From developing energy conversion systems that use abundant fossil energy resources to produce power, fuels and chemicals, to developing and using advanced energy analysis models to support decision-making, NETL continues to aggressively pursue its mission to discover, integrate and mature technology solutions to enhance the nation’s energy foundation and protect the environment for future generations. NETL researchers had a productive year, underscored by forward-looking innovation and technology development. Here’s a look at a few of our leading-edge successes from 2019.

The analyzer uses a technique called Raman laser spectroscopy, in which laser light interacts with molecules to provide characterization information about the gas. This enables a continuous readout of the composition of the gas being combusted, which can allow operators to better control the combustion process for more efficient energy production.

The partnership with Solar Turbines is a crucial step toward its eventual implementation in power plants across the country, where it can benefit the American people by improving and enhancing our nation’s energy production.

Gasification Gains for Clean Energy
In another area of innovation, NETL researchers unleashed the power of microwaves to convert fuels like coal, oil and natural gas into marketable fuels, chemicals and products. In addition to providing higher yields with lower temperatures and less energy, this work is also advancing understanding of the science behind the reactions through state-of-the-art bench-scale facilities with an eye toward scalable and economically viable systems.

Gasification involves reacting coal at a high temperature without combustion; however, traditional thermal heating can be costly and very energy intensive. Alternatively, NETL researchers are focusing on using microwaves to provide rapid and selective energetics on a molecular level.

The team had success with microwave-enhanced ammonia synthesis. In a collaboration with the Advanced Research Projects Agency-Energy, the NETL team demonstrated that microwave irradiation could achieve significantly higher ammonia yields at lower temperatures (300° Celsius) and ambient pressures using supported metal catalyst systems. Ammonia is an important precursor to a variety of fuels, foods and pharmaceuticals. Developing a more efficient system could save considerable water and energy resources.

In another gasification project, NETL researchers enhanced gasifier performance though improved oxygen carriers — an endeavor that is cutting costs, maximizing efficiency and contributing to America’s future in clean energy while working to mitigate environmental impact. Specifically, NETL is exercising its world-class expertise through the investigation of metal oxides, which are important due to their unique properties and energy applications. These oxides can serve multiple purposes as oxygen carriers, which provide oxygen during gasification.

Pure oxygen is helpful in maximizing the efficiency of gasification, but oxygen is both challenging to make and expensive to purchase. To alleviate this problem, NETL researchers are working with different types of oxygen carriers that can be used to either produce pure oxygen streams to feed into gasifiers or directly oxygenate coal fuel during gasification. This eliminates the need to obtain oxygen from outside sources while still providing optimal operating conditions for energy production.

To determine the right oxygen carrier for the job, NETL’s researchers applied their expertise to design new oxygen carrier compositions with properties that are specifically tailored to deliver oxygen quickly and efficiently. By increasing the complexity of the chemical composition, NETL researchers can fine-tune specific properties, such as operating temperature and how fast oxygen is delivered. NETL researchers have identified several promising materials belonging to the perovskite family, which are inexpensive to produce and have demonstrated potential not only in gasification systems, but also for use in other energy technologies.

Prior to the update, PRELIM provided results that were limited to energy use and greenhouse gas emissions. The NETL work added criteria including air pollutants, hazardous air pollutants, releases to water, releases to land and managed wastes using data from a variety of publicly available data sources. The addition of these emissions will allow a more comprehensive analysis of the potential environmental tradeoffs associated with the shifts in refinery practices that are largely being driven by shifts in the U.S. crude supply and environmental regulations.

A manuscript detailing the work was published in the journal Environmental Science & Technology and is available here.

Another NETL-led study examined natural gas liquids unloading and provided a clear example of the importance of methane quantification research to improve the performance of the U.S. natural gas industry. The study highlighted the need to consider variability in episodic emission sources and regional differences in developing robust methane emissions estimates.

Methane is the primary component in natural gas, which provides abundant and affordable power for U.S. homes, businesses and more. However, methane within the atmosphere also contributes to the greenhouse effect. The Lab’s work to identify methane emissions sources and improve emissions estimates aids efforts by NETL and other research facilities to develop clean technologies that reduce methane emissions to ensure the public’s health, safety and security.

Liquids unloading is an essential step in natural gas operations. Fluids often build up within a well during production for a variety of reasons. As this occurs, the accumulated liquids must be released periodically to avoid inhibiting gas flow and maintain production. However, these unloading activities release methane into the atmosphere.

NETL researchers focused on the 18 most productive U.S. natural gas basins and examined different ways in which wells are unloaded. The NETL team developed a detailed model with multiple parameters that affect the scale of emissions from liquids unloading operations. These parameters are highly variable, both within and across natural gas production basins. Statistical distributions were assigned to account for this variability, and then liquids unloading was simulated in a model with thousands of iterations.

The results indicated that methane emissions from liquids unloading varied considerably within and across basins, with average methane emissions rates highest in the San Juan basin — which spans portions of New Mexico, Colorado, Utah and Arizona — and the broader Rocky Mountain region.

In addition, a small portion of natural gas wells with high unloading frequencies were found to constitute a disproportionately large fraction of total emissions. These infrequent but high-emitting activities are referred to as “super-emitters.” This work showed that super-emitter characteristics arose organically from the probabilistic model. This confirms the statistical modeling used by NETL aligns with field observations of super-emitters.