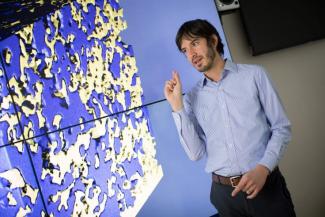 NETL researchers are using the Lab’s cutting-edge computational tools to model thousands of simulated microstructures as they seek to boost the performance and longevity of energy-efficient, near-zero-emission solid oxide fuel cells (SOFCs).

One of the primary obstacles to widespread commercialization of SOFCs is degradation, a gradual decline in performance that limits a fuel cell’s lifespan. Several suspected contributors to performance degradation are tied to the microstructural composition of the positive and negative electrodes, which are stacked on either side of an electrolyte within an SOFC to facilitate chemical reactions.

To date, NETL has examined a vast library of 45,000 synthetic microstructures, representing the largest variety of microstructural possibilities known within the fuel cell world, using the Lab’s Joule supercomputer. Among other takeaways, preliminary results indicate that performance and degradation are contingent upon an electrode’s initial microstructure rather than changes in its microstructure over time.

Following successful pilot testing, NETL researchers are ready to tackle actual microstructure data from manufacturers and other stakeholders. Scientists are incorporating big-data analysis tools and other advanced computational techniques to investigate how specific microstructures impact whole-cell performance, study the relationship between spatial properties and fuel cell outcomes and visualize microstructural changes alongside performance data. For example, one comparison indicated that increasing the diverse mix of molecules of yttria-stabilized zirconia, an ion-conducting material in both electrodes, while decreasing that of lanthanum strontium manganite, an electron-conducting phase in SOFC cathodes, exacerbated degradation.