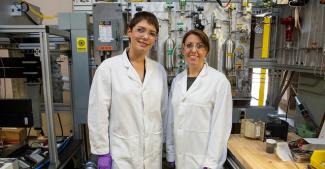 Gasification involves reacting coal at a high temperature without combustion; however, traditional thermal heating can be costly and very energy intensive. Alternatively, NETL researchers are focusing on using microwaves to provide rapid and selective energitics on a molecular level.

“Microwaves have many advantages over traditional thermal heating,” said Christina Wildfire, a researcher at NETL. “For instance, you don’t need to heat up the entire system. Microwaves can target just the materials, resulting in higher product yields and greater selectivity.”

The team has had great success with microwave-enhanced ammonia synthesis. In a collaboration with the Advanced Research Projects Agency-Energy (ARPA-E), the NETL team demonstrated that microwave irradiation could achieve significantly higher ammonia yields at lower temperatures (300º Celsius) and ambient pressures using supported metal catalyst systems. Ammonia is an important precursor to a variety of fuels, foods, and pharmaceuticals. Developing a more efficient system could save considerable water and energy resources.

NETL researchers like Wildfire are investigating the detailed reaction mechanisms using state-of-the-art bench-scale facilities, including a one-of-a-kind variable frequency reactor. And, it appears that a non-thermal effect also factors into the enhanced conversion and selectivity associated with microwave-assisted reactions. Once the team better understands how microwaves interact with materials, they can design optimal microwave systems for fuel conversion applications that are scalable and economically viable.

Gasifiers primarily convert coal to syngas (hydrogen, carbon monoxide and carbon dioxide). Researchers can target other value-added chemicals from coal by changing temperature, microwave power and frequency, and changing the feed stream to include steam, CO2, or methane.

“Another advantage of microwave gasification is the ability to pulse the microwave during the reaction,” Wildfire explained. “This allows us to be more energy efficient and increase product selectivity by providing just enough energy to initiate the reaction with no excess energy, which can often lead to subsequent, undesired side reactions.”

“The microwave gasification systems can also be smaller and more modular, and since they don’t require a lot of electricity, they could potentially operate on renewable energy sources like solar panels,” said Wildfire. “Plus, unlike traditional coal-fired power plants that can take a significant amount of time to ramp up and down, microwave gasifiers could increase grid resiliency due to rapid start up and shut down times.”

Gasifiers have provided the nation with clean energy and valuable chemicals for nearly two centuries, but innovations have been largely incremental. However, microwaves are demonstrating the potential to provide a step-change in gasifier improvement, and NETL is at the forefront of this technology transformation.