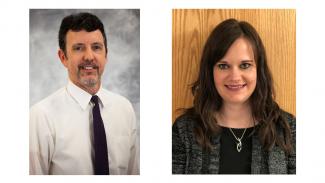 NETL Employees Earn Recognition from the Oregon Federal Executive Board

NETL employees were honored for their excellence in government service at a recent ceremony hosted by the Oregon Federal Executive Board (FEB) Tuesday, May 7, 2019, at the Portland 911 Federal Building.

Stephen Curfman received an Unsung Hero award for his critical “behind-the-scenes” work that has created and preserved a safe and healthy environment where innovation thrives, the performance of personnel is elevated, and NETL’s mission for America scores significant scientific success.

NETL’s Marisa (Arnold) Stuart was also recognized as a nominee in the Leadership Award category, for her exceptional support of the team she manages and her efforts to drive excellence at the Lab.

The FEB Excellence in Government awards recognize outstanding federal employees for efforts that encourage innovation and excellence in government; reinforce pride in federal service; and call public attention to the broad range of service provided by federal employees. An independent committee of federal executives selected the award winners.

The Oregon FEB works to increase the effectiveness of federal government by strengthening coordination of government activities. Initially established in 1969 as the Portland Federal Executive Board, the Board was renamed as the Oregon Federal Executive Board in 1998 to reflect its expanding service area. Since its establishment, thousands of federal employees have worked together to create better partnerships and a more effective federal government in the Oregon region.