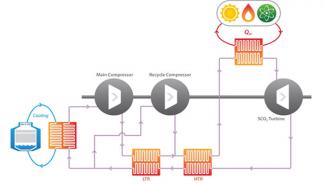 Turbines are important machines in our nation’s fleet of fossil-fueled power plants, extracting energy from domestic resources and converting it into the electricity we depend on. Turbines can also be key players in conserving resources because they can provide clean energy by using less fuel and generating fewer emissions.

In a coal-fueled power plant, fuel is combusted in a large furnace to release heat energy. That energy is then used to heat a boiler that turns water into steam. The steam drives the plant’s turbine, which converts the heat energy into kinetic energy. Inside the turbine, steam flows past the turbine blades causing them to turn, like a windmill or pinwheel, except that turbines are much more sophisticated with hundreds of tightly packed blades.

Steam exits the turbine and is cooled and condensed through a heat exchanger so the water can be pumped back for reuse. An axle connects the turbine to a generator that spins around with the turbine. The generator uses the kinetic energy from the turbine to make electricity, which travels out of the plant and eventually powers our businesses, homes, appliances, and more.

Raising temperatures and pressures to push steam into its supercritical state – a phase where water and vapor occur simultaneously – is one way to enable turbines to work efficiently. NETL researchers are investigating how to gain even more efficiency and thus lower the cost of electricity by replacing steam with carbon dioxide (CO2).

In its supercritical state, carbon dioxide behaves more like a liquid than a gas and can be used as the working fluid – replacing steam - in the power plant. sCO2 is significantly denser than supercritical steam. It’s also cheap, non-toxic, readily available, and less corrosive than steam.

There are key advantages to using sCO2 in the nation’s power plants. Unlike water, small changes in temperature and pressure can have a large impact on the density of CO2. This means a large amount of energy can be extracted from sCO2 using smaller equipment, which can translate to reduced capital costs. In addition, pressure ratios for sCO2 power cycles can be less than 20 percent of those required for steam turbines resulting in further reduction in the required size of the machinery. The recovery of the heat in the working fluid exiting the turbine using heat exchangers minimizes the heat rejection from the power cycle and allows for higher efficiencies.

The sCO2 power cycle also allows for reduced water use, with some configurations allowing for the cycle to be a net water producer. Ultimately these benefits add up to a technology option that could potentially address both energy and environmental challenges by increasing efficiency, reducing emissions, and lowering capital cost and cost of electricity.

Challenges exist, and NETL is on the case. The Lab is evaluating materials for use in the construction of components of the sCO2 power cycle that can withstand corrosion, erosion, and provide optimal mechanical performance. Researchers are developing compact heat exchangers to recover heat in the cycle and improve efficiency. Using a special computational model, NETL researchers are also investigating turbine blade cooling to support the use of higher turbine inlet temperatures, which can enable higher efficiency.

Researchers are performing analyses of the cycle to determine the technical and economic performance of power plants using the sCO2 power cycle compared to current steam-based plants. They’re also performing R&D related to the direct-fired Allam sCO2 power cycle – a configuration in which the combustion of oxygen and fossil fuel produces a mixed stream of CO2 and steam that is used as the working fluid in the cycle. This high efficiency cycle can produce a high purity CO2 stream that is ready for use/reuse or storage.

NETL researchers are also filling the knowledge gaps on oxycombustion, a key technology within the Allam cycle, by modeling the combustion process in the high pressure, high temperature conditions in the presence of CO2 and by developing the capability to test oxy-combustion at the high-temperature and high-pressure conditions of the sCO2 power cycle. Using oxycombustion in the direct-fired sCO2 power cycle enables power generation with CO2 capture.

In addition to the Lab’s inhouse work, NETL manages complementary external projects to develop sCO2power cycles. Key projects target development of turbomachinery, recuperators, and oxycombustors for combustion at high temperature and high pressure with CO2, and integration of heat sources with the sCO2power cycle.

As part of this effort, the Lab is a key collaborator – along with the DOE offices of Energy Efficiency and Renewable Energy, and Nuclear Energy - in a six-year project funded under DOE’s Supercritical Transformational Electric Power (STEP) program, to design, build, operate, and test a 10-MWe sCO2 pilot plant test facility in San Antonio, Texas.

The project, managed by Gas Technology Institute (GTI), Southwest Research Institute (SwRI), and General Electric Global Research, seeks to verify component and cycle performance, cycle operability, demonstrate the potential for a lower cost of electricity and a pathway towards a thermodynamic cycle efficiency that is greater than 50 percent. The work is a productive example of how government and industry work together to mature critical technologies at the pilot scale to facilitate commercialization and spur development.

Maturing sCO2 technology has promising implications for the nation’s energy future, including the potential to stimulate the economy and enhance our national security, while protecting our health and environment.

Innovation in the large, high-temperature stationary power generation would maintain American advantages in turbomachinery technology, and provide strategic growth opportunities for domestic manufacturers. Beyond that, because sCO2 power cycles can be highly efficient and require small turbomachinery, the technology has many applications, such as shipboard use in propulsion, power, and waste heat recovery. For the energy industry, fossil fuels – particularly coal – can provide an ideal heat source for sCO2 cycles. The advantages of sCO2 technologies are also attractive to solar, nuclear, and geothermal heat sources because sCO2 power cycles are fuel- and heat-source neutral.

NETL’s sCO2 technology research is just one example of the lab’s innovation as it works to discover, integrate and mature technology solutions to enhance the nation’s energy foundation and protect the environment for future generations.